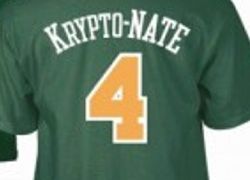 The NBA has agreed to cease its proposed Krypto-Nate T-shirt campaign. During last month's NBA Slam Dunk Contest, New York Knick Nate Robinson won the contest when the guard literally dunked over Dwight "Superman" Howard. In an attempt to capitalize on the victory, the NBA planned to issue a t-shirt that would play on the words Nate and Kryptonite.

The controversy began at last year's slam dunk contest, in which "Superman" Howard won the title by donning a red cape like that of his namesake and performing a one handed dunk. Howard was a lock to repeat as Dunk Champion until Robinson stole the award by performing a dunk in which he leapt over the defending champion. After the victory, the 5ft 9in guard started to call himself "Krypto-Nate" to Howard's Superman.

According to the New York Post, two days after the Valentine's Day victory, the NBA began plans to issue a green New York Knicks T-shirt adorned with Robinson's number 4 on the front and back. Over the number on the back, instead of Robinson's name would be the moniker Krypto-Nate. A day later, officials for DC Comics ordered that creation of the shirt cease immediately, as the word Krypto-Nate infringed on copyrights held by the publisher.

Now the NBA has announced that they have scratched plans for the controversial Tee. Representatives for the NBA stated that they have shelved the project in order not to hamper any future joint advertising ventures with DC Comics and its parent company Warner Bros.

This decision comes on the heels of the NBA decision to ban Dwayne Wade from wearing his signature band-aid, one of which bore his nickname, "Flash," with an appearance similar to the DC Comics Flash font and logo. The NBA cited a desire to avoid self-promotion in that decision.