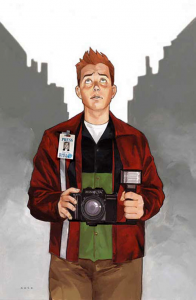 Back in the late eighties, Jim Starlin was the writer on the "A Death In The Family" storyline that was published in Batman comic books. The famous storyline allowed fans to call in to vote on whether they wanted Robin to live or die. In an appearance at the Nashville Comic & Horror Festival, Jim Starlin told a rather interesting story from DC Comics history about an internal vote DC Comics held, which helped create the idea for the public call-in vote to determine Robin's fate. Jim Starlin said, "When the AIDS epidemic first came to light, DC had this idea to do a book where one of their characters contracted AIDS and died from it. And so, being the nice sensitive subject that it is, they put out a suggestion box that you were supposed to drop in the name of the character that you thought should die from AIDS." When asked if the suggestion box was public or private, Starlin clarified, "This was in the office. So as soon as I heard about this, I stuffed it full of Robins." Starlin joked, "I was doing a lot of drugs back then, so it didn't occur to me that I should change my handwriting, so they threw those all out." Starlin continued, "In the end, the character that they voted most wanted to see have AIDS was Jimmy Olsen. I don't know why. But that idea got scuttled when somebody told them that the actor who played Jimmy Olsen in the Christopher Reeve Superman movies was actually gay in real life. And so they got scared, and they dropped the whole project at that point."

DC Comics Once Considered Having Jimmy Olsen Die From AIDS