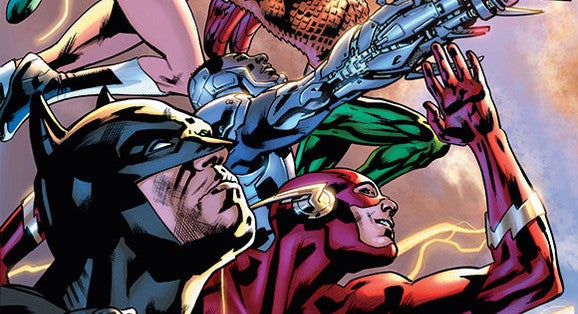 DC Comics is going through some considerable changes this Summer, after the 2-month Convergence event set to see their Multiverse clash against itself. After April and May's weekly event, which will see the entire line transformed into tie-in stories (while DC Comics moves its offices from New York to Southern California), the DC Universe line will undergo a major overhaul, with 24 new series joining 25 of their biggest hits and newest titles.

The overhaul will also include a focus on diversity, both in the series being presented, the stars of those comic books, and the creators involved. Creators from years past at DC, plus some brand new to the publisher will join the lineup as the new era of the DC Universe begins, a press release touted. The changes will see the end of the "The New 52" branding in place since the line-wide reboot in September 2011.

The new status quo will be teased in the Free Comic Book Day offering from DC on May 2, 2015, titled Divergence. While the one-shot won't include any of the new series, it will include the first 8 page story by the new Superman creative team, plus an 8 page preview story of the next Batman arc by continuing team Scott Snyder and Greg Capullo, and an 8 page preview story of Geoff Johns and Jason Fabok's "Darkseid War" storyline coming to Justice League this Summer.

While details are still coming on the individual series, DC has released the full list, with creative teams, of both the 24 new titles and the 25 ongoing series that will continue, largely with their existing writers and artists. The only notable exceptions to that are Superman, which sees American Chinese writer Gene Luen Yang join on as writer with John Romita, Jr. sticking around on art, and an as-yet-unannounced Justice League United creative team overhaul. The new series are indeed diverse, with buzzwords "inclusive" and "accessible" used to describe them in the press release. From comedy series like Bat-Mite and Bizarro, to ongoing series for Black Canary, Cyborg, and Dr. Fate, and revival of long-since lost concepts and characters like Section 8 (by Hitman creative team Garth Ennis and John McCrea no less), and Omega Men, it's clear DC is ready to try a very many somethings new. The full list of titles and teams as of June 2015 in the DC Universe line is below, with more details to come.

Check out the gallery of the first preview images and promo art, and let us know which title you're most excited for in the comments!