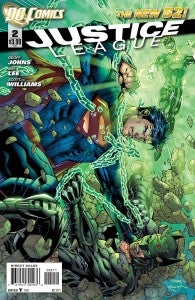 The second month of DC Comics's New 52 initiative continued the phenomenal sales success of the first month, with October 2011 actually exceeding September in units sold from Diamond to comics retailers (bear in mind, many of those units were likely reprints of DC's September #1 issues) and the publisher retaining 17 of the month's top 20 sales positions on the sales charts, according to Comichron. Compared to last year's sales, not only were comics sales up more than 30% (units shipped) for the month of October, but the massive successes of the last two months have helped to push 2011's overall sales higher than they were at this time in 2010 after a disappointing start to the year.

The numbers released from Diamond Comics Distributors seem to suggest that comics were ordered at a staggering pace that saw retailers spend more money than they had since December of 2009, in the middle of the wildly popular Blackest Night event. In terms of actual units shipped, the last time this many comics were ordered in a month appears to be May 2007. Arguably the most impressive takeaway from the numbers provided so far is that it appears (even with the underreporting that's built into the system to accomodate returnable items like most of DC's New 52 books) the market grew by about 7% from September to October. Much of the discussion between the announcement of the relaunch and the end of September revolved around what kind of bubble September's #1s would create and how dramatic October's drop-off would be. The fact that the month gained numbers--in whatever way it did--should do a lot to bolster retailer and reader confidence in the New 52.

While DC's market share topped the industry for the second month in a row (a rarity given Marvel's dominance in recent years), the increased traffic and awareness of comics in general seems to have increased sales across the board with speculation that despite only 3 titles in the top 20, Marvel's numbers may not have dropped much (or at all) since August, when they were comfortably in charge of the sales chart. Bleeding Cool has further speculated that it's possible no DC book lost numbers from issues #1 to #2, a feat that would be astonishing in the modern comics market but seems unlikely given that their market share increase may be explained at least in part by reprints.

Again this month, all 52 of DC's main-line superhero comics appear in Diamond's top 100 for the month, but this time they're joined by a number of the top-selling first issues which were hitting stores in second prints (and, according to Bleeding Cool, a handful of mysteriously-unsold first prints as well). The lowest-selling current DC superhero book of the month dipped from 84 in September to 87, with O.M.A.C. climbing and some predictably harder sells like Blackhawks and Men of War rounding out the bottom instead. Three DC miniseries set in the new continuity--The Shade #1, Huntress #1 and Penguin: Pain & Prejudice #1, also all made the top 100, with Penguin placing lowest at #96.

"We don't really care about winning the market share battle. Or winning any month, per say. But the data we do look at is things like line-wide average," explained John Rood, executive vice president of sales, marketing and business development for DC Entertainment told Newsarama. "And when line-wide average is as high as it is, that makes us pretty bullish. And if this is the level the retailers are settling at, we're bullish about that as well." He also suggested to Newsarama that digital sales are coming in at around 10% of the rate of physical copies, the first real indication by DC as to the dollar amount they're seeing from digital sales. Whether that number will increase or decrease as a result of prices beginning to drop on the first and second issues as they cross the thirty-day-old threshold remains to be seen.