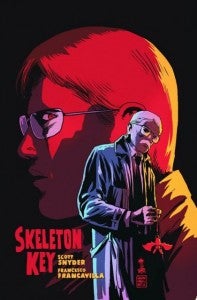 This is it. Scott Snyder has three issues of Detective Comics left and he hits the last stretch running with #879. The issue centers around Commissioner Gordon trying to come to grips with whether or not his son, James Junior, is a murdering psychopath. There's also an appearance by the Joker, and in his typical fashion, things turn to chaos. While Gordon and Oracle investigate Junior, Joker tells a rather lengthy, revealing story to the doctor before making his escape. Snyder has set up two conflicts that will come to a head in the next two issues, capping off an awesome run. He writes Gordon as a reluctant cop, as nobody wants to believe their child could be capable of evil. There are nice moments between him and Barbara as she tries to get her father to realize the truth. His Joker oozes with creepiness as his plan comes to fruition. The Joker is meticulously cunning and always three steps ahead of those who are ill-prepared for him. I can't wait to see what Snyder has planned for him in the next couple of issues. A noticeable lack of Batman doesn't really pull the issue down any, as these moments needed to be set up and did not require his presence. With Joker on the loose, you better believe he'll be out to bring him in next time around. Jock gets a break and Francesco Francavilla is brought back in for art duty. His work has a classic feel to it that seems fitting for Detective. Him and Jock have done an excellent job with this series. We never get to fully see his Joker, but the aftermath of his escape leads me to believe he would have been nothing short of terrifying. No doubt about it, Snyder is one of the best Batman writers in recent memory. His ability to do an issue of a Batman comic without Batman, and make it feel like a completely natural, necessary addition to the story is impressive. He has raised the stakes for Gordon and Grayson and both of them are in store for trials that will likely have a lasting effect on them mentally. I'm excited to see where it leads us.