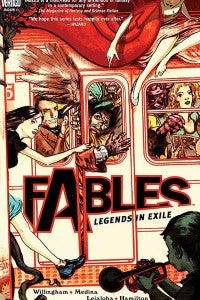 Over the last 6-7 years, we've seen the 'go-stop' Hollywood machine in action as it relates to the comic book series 'Fables.' Written by Bill Willingham, 'Fables' is a brilliant comic book series published by DC/Vertigo. In 2006, NBC put a 'Fables' TV show into development, but the project never got off the ground. Then, in late 2008, ABC picked up a pilot that was supposed to air the following Fall. The episode has never aired. Heck, we don't even know if they actually shot the thing. Now it looks like ABC has completely scrapped Fables and put a knock off on the series schedule. This October, the network is airing 'Once Upon A Time', a series about classic fairy tale characters set in modern times. Anyone know what 'Fables' is about? Oh yeah--A SERIES ABOUT CLASSIC FAIRY TALE CHARACTERS SET IN MODERN TIMES. So why the screwjob by ABC? Is it because the show was developed by two writers from 'Lost?' And that 'Lost' creator Damon Lindelof has his hands in the project? Is ABC just showing loyalty to folks that have brought them plenty of success (and money) in the past? Or does it have to do with licensing fees from 'Fables' bumping up the budget? It would be nice to know. Out of all of the proposed TV series we've heard about (or seen) the past few years, 'Fables' is the one we were most excited about.

Did ABC Dump 'Fables' For 'Once Upon A Time?'