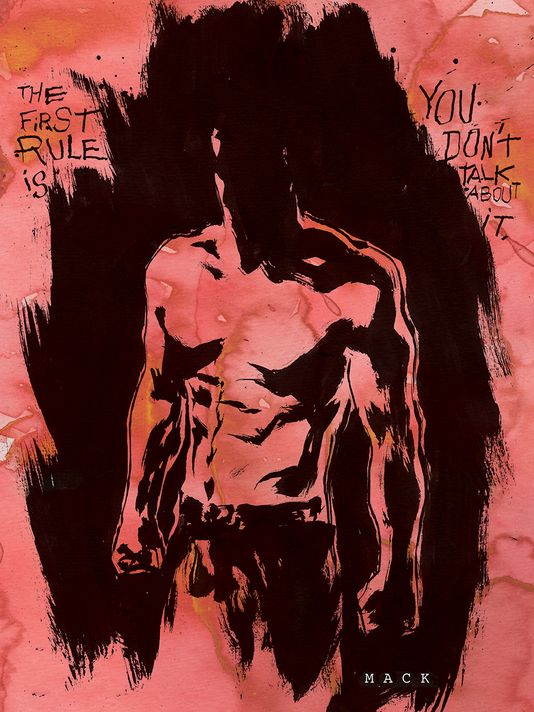 Chuck Palahniuk and Cameron Stewart will be the writer/artist team for Fight Club 2, a 10-issue Dark Horse Comics miniseries featuring covers by David Mack and set to roll out in 2015.

reports that Fight Club 2 takes place alternately in the future and the past, picking up a decade after the ending of his original book, where the protagonist is married to Marla Singer and has a 9-year-old son named Junior, though the narrator is failing his son in the same way his dad failed him.

Palahniuk teased that the sequel will give readers a sense of Tyler's true origins. "Tyler is something that maybe has been around for centuries and is not just this aberration that's popped into his mind," the author said.Palahniuk announced the project last year at Comic Con International's "Ode to Nerds" panel, and a week later The Cult, a Palahniuk fan website, ran a full statement from the author.

About the graphic novel, it's true. Chelsea Cain has been introducing me to artists and creators from Marvel, DC and Dark Horse, and they're walking me through the process. It will likely be a series of books that update the story ten years after the seeming end of Tyler Durden. Nowadays, Tyler is telling the story, lurking inside Jack, and ready to launch a come-back. Jack is oblivious. Marla is bored. Their marriage has run aground on the rocky coastline of middle-aged suburban boredom. It's only when their little boy disappears, kidnapped by Tyler, that Jack is dragged back into the world of Mayhem.

It will, of course, be dark and messy. Due to contract obligations it can't come to light for a while. Next year is "Beautiful You," followed by the story collection. But since the Fight Club sequel will appear serialized in graphic form, my book publisher might allow me to launch it earlier than 2015.
Feel free to release any or all of this information. We haven't started to court a specific publisher, not until I hammer out the complete story.

Written in 1996, Palahniuk's novel spawned a 1999 movie by director David Fincher that's become one of the great cult hits of the last twenty years. A dark satire of modern culture that examined the ideas of violence and masculinity, the book was originally published by W.W. Norton. Most of his subsequent novels (all of those that came after the Fight Club movie) have been published by Doubleday. Another of Palahniuk's novels, Choke, was translated into a film directed by Marvel's Agents of S.H.I.E.L.D. star Clark Gregg.

Marvel and Image Comics staple Matt Fraction has reportedly been working with Palahniuk in helping to write comics scripts.

"The sequel will be told from the — at first — submerged perspective of Tyler Durden as he observes the day-to-day tedium of the narrator's life," Palahniuk has said. "Because 20th Century Fox created the convention of calling the protagonist Jack, I'm calling him Cornelius. He's living a compromised life with a failing marriage, unsure about his passion for his wife. The typical midlife bullshit. Likewise, Marla is unsatisfied and dreams of accessing the wild man she'd once fallen in love with. She tampers with the small pharmacy of drugs that her husband needs to suppress Tyler, and — go figure — Tyler reemerges to terrorize their lives."