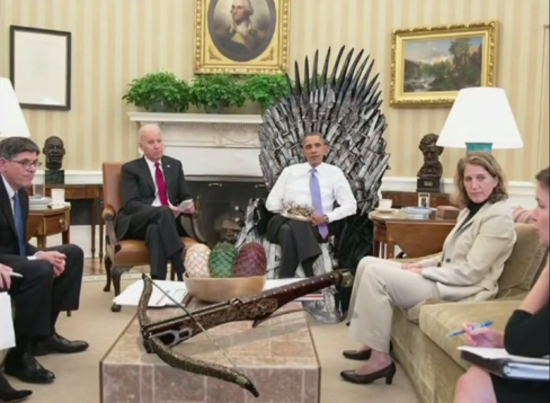 creator George R.R. Martin was a guest on Conan last night. Conan O’Brien brought up that fact that President Obama had used the Iron Throne as part a joke in his routine.

The gag was in reference to the President’s promise to use more executive orders to get things done without having to deal with congress. Some have said this move is a sign of an “imperial presidency.” The President then asked to show a picture of him at work and displayed a picture of him in a meeting with the Iron Throne edited in as his chair.

Martin said that he could provide the president with an actual Iron Throne if he liked.

“We would gladly give him one,” said Martin. “We have about six or seven of them. We gave one to a guy in Brooklyn recently.”

So apparently they’re just giving these things away. I wonder if the President would be able to get more done if he held all of his meetings while sitting on such an imposing seat.