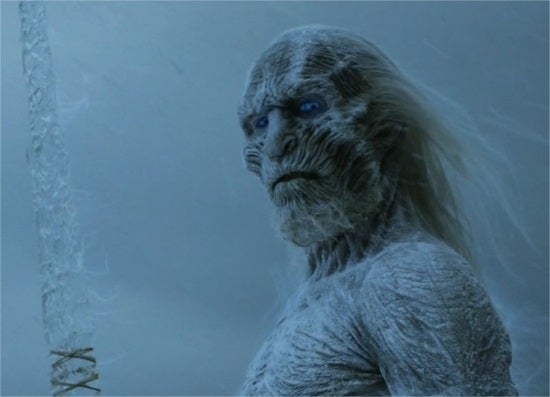 The White Walkers have been present on the fringes of Game of Thrones’ story since the beginning, but, if the end of “Oathkeeper” is anything to go by, we may be learning more about them soon (which is interesting because, even with the books taken into consideration, we still know so little). Here’s a recap of what we know from their appearances so far in both Game of Thrones and A Song of Ice and Fire.

The White Walkers, usually called the Others in the books, are an ancient race from the Land of Always Winter that most of the people in Westeros believe to be little more than a fairy tale in the present day. 8,000 years before the events of Game of Thrones, when the First Men and the Children of Forest still ruled Westeros, the White Walkers invaded Westeros during a generations long winter called The Long Night. The White Walkers’ army grew and grew as they reanimated those they killed into wights to serve their cause.

The First Men and the Children of the Forest came together and finally defeated the White Walkers in a conflict known as the War of the Dawn. According to followers of the Lord of Light and some other tales, they were unified by the “last hero,” a First Man named Azor Ahai. The followers of the Lord of Light also believe that, when the White Walkers return, Azor Ahai will also return to battle against them.

It was around this time that the unified First Men came under the rule of the Starks and built Winterfell. Following the War of the Dawn, Bran the Builder used science and magic to build the Wall, designed to keep the Walkers out if they ever returned. The Night’s Watch was also formed to guard the wall and watch for the White Walkers’ return. The purpose of the Wall and the Night’s Watch has long been forgotten as memory of the White Walkers slipped into myth, with the people of Westeros instead believing the Wall is there to keep out the Wildlings.

The White Walkers appear humanoid, but are clearly something else. They are pale, with bright blue eyes. Wherever they are, cold weather follows (though it unclear whether or not they cause the cold or simply travel with it). They can transform the dead into wights, including animals (some have been seen riding dead horses). There are also rumors that wildling women have taken White Walkers as lovers and borne hybrid children, but whether or not this is true is unknown.

There’s also the tale of the Night’s King, a Lord Commander of the Night’s Watch who loved a White Walker woman (something we haven’t seen yet in the show). The Commander brought the woman back to the Night’s Fort and ruled it as his horrible kingdom until the King in the North and the King-Beyond-the-Wall joined forces to defeat him.

Nothing else is known of their culture. The final scene from “Oathkeeper” is the closest thing we’ve gotten to a look at them in their own element, but things are still unclear. Apparently they can take children and turn them into more White Walkers, as they have been doing with Craster’s sons (the Night’s King was also said to be making sacrifices to the White Walkers). Whether this has to do with the specific White Walker who touched the child (the one with the horns, perhaps a kind of crown?), or the ring of ice pillars and the ice alter that the act was performed at, or neither, remains to be seen.

Game Of Thrones: Who Are The White Walkers?