One of the most persistent criticisms of Zack Snyder's Man of Steel is the handling of Jonathan Kent.

"Pa" Kent, Superman's moral compass in many comic book stories, was recast in the film as a man who cared more about his son than he did about the outside world, and who furiously tried to protect Clark from the world around him.

Besides the infamous "maybe" scene in which Kent suggested that perhaps Clark should let people die rather than reveal his superhuman abilities, Jonathan objected to Clark using his powers any number of times in the film, culminating in what many have seen as a fairly absurd sequence: Jonathan's death-by-tornado, something that could have been prevented in a number of ways had he or Clark thought for a minute about effective, judicious use of super speed.

But anyway, we don't want to be distracted by the logical lapses of that one scene. What's more interesting (today, anyway) is that the most recent issue of Superman by Geoff Johns and John Romita, Jr. features Superman offering some familiar advice to the parents of Ulysses, the super-being who has been visiting Earth for the last couple of issues... 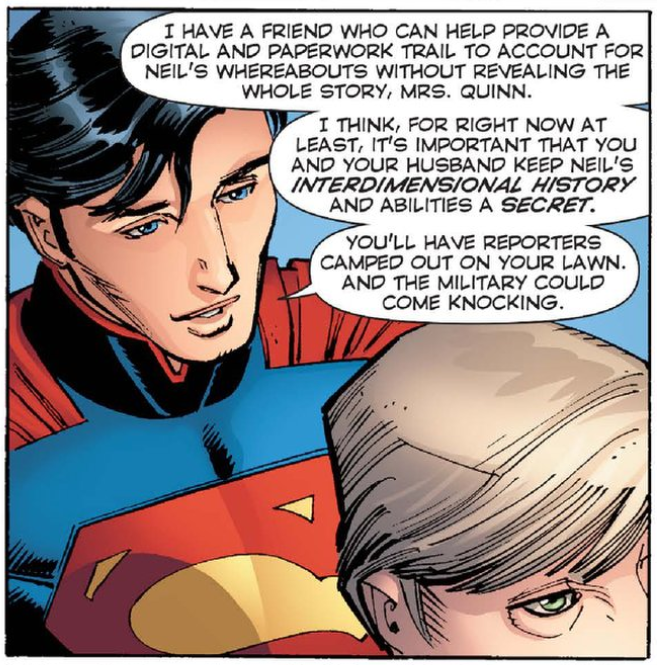 While obviously there's a benefit to a secret identity, and Superman has never been a stranger to helping others build such an identity (in fact, Johns was one of the key writers who depicted the role Superman played in helping to craft the "Connor Kent" identity for Superboy in the pre-New 52 universe), the exact wording here sounds...familiar.

It's likely just a part of DC's overall move toward grounding its stories in a recognizable version of reality (remember that Batman started the New 52 running from police and there have been several stories about people's fear of or hatred for aliens, including Superman, since 2011).

Superman #34 is on sale now, if you'd like to check it out in context.