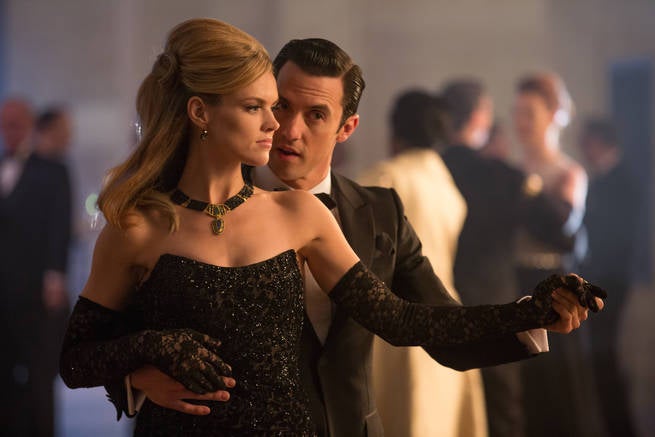 The episode opens on Bruce and Selina walking under a bridge, retreating from where Reg's body lies. A man menaces Bruce, but retreats when Selina threatens him with a knife.

Bruce asks about Reg, and Selina says that he's dead, and that the police are on the scene. Bruce reveals that every senior executive at Wayne Enterprises has a private safe in their office, one that opens with a key. Selina tells Bruce that she will get the key from Bunderslaw if Bruce gets her close enough. She warns him that he can never tell anyone, even Alfred, what she's done.

As Nigma is testing different stabbing techniques on watermelons to figure out how a murderer wielded a knife, Gordon comes in looking for Thompkins; Nigma says she went home.

At her apartment, Thompkins is in the tub when she hears a noise. She gets out to look for Gordon, sees she's missed a couple of his calls, but the intruder is only a cat, which she shoos back out the open window through which it entered. She's then startled by Gordon, and turns around, smashing him over the head.

Later, she's helping him ice his head wound and Gordon briefs Thompkins on the dangers of The Ogre, and how it is that Gordon ended up with the case. Gordon says Bullock knows a cop who came in and found his wife murdered. Gordon says he can't let The Ogre go free, so Thompkins is in danger. He wants her to leave town, but she refuses, saying that if Gordon wants to protect her, he'll find the killer. Gordon tells her that he loves her, and she jokes that it only took a serial killer to get him to say it.

At a bar, The Ogre meets Barbara Kean and goes back to her apartment with her. There, he asks about her boyfriend and she denies having one, saying that if she died tomorrow, nobody would care. She asks him if that changes things for him and he says hes, putting away the knife he's been holding onto. She tells him that one he saw the real her, he would run screaming like everybody else. He says she's not who he imagined she would be, and she tells him to let himself out. The two part ways.

At Oswald's club, he excuses himself from a conversation with his mother to talk to a hitman. He asks the man to help him kill Don Marone and his top lieutenants, and the man declines. Oswald tells him that if he does this, he can overtake Zsasz as Falcone's #1 man. The hitman says he'll come by tomorrow to talk details.

At the police department, Gordon and Bullock sit down with Bullock's old friend, the first to investigate The Ogre. The man doesn't want to help; his wife was murdered, and he has a daughter to worry about. Gordon asks him what is missing from his notes on the investigation. The cop tells him that he was doing background on the victim, and that she worked for a cosmetic surgeon uptown. Bullock and Gordon tell him they'll put cops on his daughter until the investigation is complete, and go to check out the clinic.

In the file room, Nigma goes to ask Kringle for help with the Ogre case and catches her kissing a cop. After he leaves, Nigma sees that she has bruises on her arms and asks whether her boyfriend did it. She confirms this, but tells him to stay out of it. He leaves.

At Wayne Manor, Bruce is preparing to attend a charity ball where he will have access to Bunderslaw. He asks Alfred to send some shoes and dresses to Selina, who will be his date.

At the plastic surgery clinic, Bullock and Gordon talk to Dr. Cushman. The nurse who was killed was referred by a patient. The doctor says they need a warrant. Outside, Gordon recognizes a car he'd seen near the police department. When they start to approach it, the car revs up and charges them. They dart out of the way but can't tail the vehicle on foot.

Back at the police department, Gordon is briefing Essen when he gets a call from The Ogre telling him to back off. He quotes a number of recent newspaper reports about Gordon's exploits and tells him not to believe his own press, or he'll kill someone Gordon loves.

Gordon responds by calling a press conference and making it a point to tell The Ogre that he will not be intimidated into stopping his investigation.

At Barbara's apartment, Selina baffles her when she reveals that they're going to the same charity ball, since Selina is going as Bruce's date. Her clothes arrive and Babara helps her get it together.

Bullock gets the call that the nurse was sent to the plastic surgeon by Constance Van Groot, the matriarch of one of Gotham's oldest families. They think she may have a son, and go to investigate.

Oswald is visited by Maroni and his men in his nightclub. Maroni has seated himself with Mrs. Kapelput and is flirting with her.

Bruce arrives at Barbara's to pick up Selina, and is impressed by how pretty Selina looks after making a little small talk with Barbara, who tells them to look for her at the ball.

At the Van Groot house, Bullock and Gordon arrive to find a man hanging from the ceiling, nearly dead. They cut him down and Bullock searches the house while Gordon handcuffs the injured man. Bullock finds the body of Mrs. Van Groot, long dead in her bed and years decayed. In the room, she's surrounded by photos of a child with his face scratched out of each picture.

At the Wayne gala, Bruce and Selina dance awkwardly.

Bullock calls into Essen to report what they've found: the hanging man was Van Groot's butler. They assume it's his son, not Van Groot's, who is the Ogre. They interrogate him, and he says that his son couldn't be The Ogre, that he only made one mistake.

At the ball, Bruce tells her that she's crossed a line that he will never cross, but she's not ashamed of it and says she would do it again. Bunderslaw enters as they argue.

At the police department, Nigma tells Officer Doherty that he has to leave Kringle alone. Doherty scoffs at him and leaves.

At the ball, Barbara meets up with The Ogre.

Van Groot's butler tells Jim and Harvey that Van Groot doted on Jason, and that Jason becomes convinced he was her biological son. When he learned otherwise, he killed her, and has been living on her money since. Jason's father still doesn't know where he is; he hasn't seen his son since that day. He laughs at the idea that his son could seduce women to lure them in for the kill. He shows them photos -- his son was hideously disfigured.

While Bullock is reporting to Essen, Gordon goes to the plastic surgeon to get confirmation that he had operated on the disfigured man.

After a night of drinking and quietly menacing The Penguin, Maroni reveals to Mrs. Kapelput what her son really does for a living, and that he has killed a number of men, including his friend Frankie Carbone.

At the ball, The Ogre reveals that he donated $10,000 to the Wayne charities to get on the list in order to see Barbara. He apologizes for the way last night went down; he says that he thinks he and Barbara have a lot in common; that they're hiding the people they really are behind a facade of what everybody else sees. He tells her that he can help her reinvent herself.

While Bruce introduces himself to Sid Bunderslaw, Selina steals his key, makes a mold of it and then replaces it. She sees Barbara leave with The Ogre and is visibly disturbed by it.

Nigma waits outside of Kringle's home until Doherty comes, seemingly drunk, and then stabs him to death in the street outside.

Back at home, Oswald tells his mother that she had too much to drink and that Maroni has a dark sense of humor. She says she will love him no matter what, but that if he lies to her now, he will break her heart. She asks him if what Maroni said was true and he denies it. The two look at each other, ready to cry, and she goes to bed. A delivery man comes with flowers from Maroni for Kapelput, and Oswald smashes the vase and kills him with it.

At the police department, Gordon and Bullock have put the pieces together to figure out who The Ogre is. The photo was missing from "Jason Van Groot's" file, but they have a sketch of him. As they're looking for more information, Gordon realizes that the press clippings The Ogre referenced included a photo of Bullock with Barbara. He goes to her house and asks Selina whether the drawing looks like the man she left the party with, and Selina says yes.

At The Ogre's fancy apartment, Babara wonders what's in the room where he'd previously killed a girl in last week's episode. He walks her inside and they look around together.

Gotham Recap With Spoilers: Under the Knife