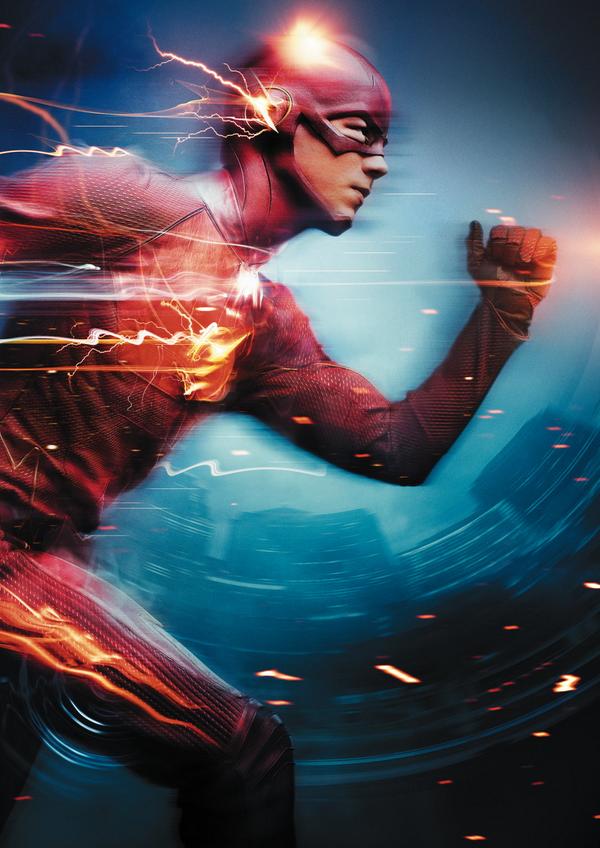 It's just a week until the launch of The CW's The Flash, the hotly-anticipated superhero series from the producers of Arrow that has had some of the best pilot reviews of the new TV season.

The pilot has been screened at Comic Con International: San Diego, and also leaked online, to almost unanimous praise. Comic book writers like Mark Waid, who has a long involvement with The Flash, lavished it with praise and we at ComicBook.com called it the best comic book TV show pilot we've seen since The Walking Dead.

And a lot of that has to do with star Grant Gustin, who embodies the angst, enthusiasm and energy of Barry Allen perfectly and who manages to make the runtime of the show blow by (no pun intended). Introduced in an episode of Arrow, the Glee veteran counts himself lucky to have got the job -- it wasn't one he expected to get, necessarily -- but producers have said that they're just as lucky to have him.

In fact, executive producer Andrew Kreisberg has said to reporters that, had Gustin or somebody as good as him not come along, the pilot might not have taken shape at all and that the project could have gone nowhere.

Gustin joined ComicBook.com at a roundtable at Comic Con International: San Diego back in July, and shared some of his feelings with us about playing the iconic character, his place in the history of television and The Flash and more.

Are you comfortable in Barry's skin at this point?

I am, actually. It was a little daunting when I got the role. It was a little daunting when I got the audition actually. I was excited to have the opportunity and didn't… I mean, some things you're like, "I have a really good chance at this," and I didn't necessarily think that about this role. But now that I have it I see why they wanted to go in this direction. It's kind of a different take on The Flash and I'm definitely starting to feel like I'm in the skin and I'm having a lot of fun. The writing is like they've already written in my voice so it's easy enough to just kind of do it. And it's just the most fun I've ever had, so it's great.

Glee was a groundbreaking show, and now The Flash is introducing a couple of gay characters. How do you feel being involved in a show that's giving visibility to a group that's underrepresented?

It's great. This genre, like you said, it hasn't really been done with this genre so it's going to be a whole broader spectrum than Glee can bring in for fans. It's great. I like being a part of it, so it's fantastic.

How much research did you end up doing into the comics and the old series to get into the character?

I started at the beginning at first. I thought I'd go all the way back and then kind of read. Then I was like, "Wait a second, this is impossible. I can't do all that."

So I read some of the old stuff but then once I worked my way toward the New 52 series, I'm pretty much just reading that now because it's the closest to what we're kind of doing. But at the same time, what we're doing has not been done in the comics. It's a very different Barry Allen. A lot of the characters are very different than they are in the comics, but they have the same heart.

I mean, I've done plenty of the research but Andrew Kreisberg, Geoff Johns and Greg Berlanti are my research. If I need information, I can just talk to them. I don't have to try to flip through the comics that relates to the episode we're doing. I just call and have a conversation with them about it.

What's been the biggest challenge you've faced so far, transitioning into The Flash?

At first, I thought it was going to be the pressure I was going to get from the fans of being the right Flash. But they've been just really accepting, I think because of the team mostly. They earned their trust with Arrow and they trust that this is going to be good. But now I think it's just, honestly, I'm trying to with the shooting schedule we have trying to maintain also being able to train and eat as much as I can. I'm a thin guy and just trying to maintain my body while doing the schedule.

Grant Gustin on The Flash: "What We're Doing Has Not Been Done in the Comics"