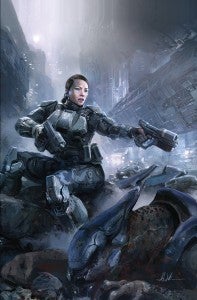 Steven Spielberg will produce a live-action TV series based on the hit XBox game Halo, according to Microsoft, who rolled out their next gaming console (Xbox One) earlier today at a press conference. The series is tentatively titled World of Halo and will be Xbox-exclusive. "For me, the Halo universe is an amazing opportunity for the intersection of mythmaking and technology," Spielberg said via a video feed. The announcement won't be the only Xbox-produced TV series for long; they've been looking into other established properties, as opposed to building from the ground up like Amazon and Netflix (primarily) have, including making a high-profile run at NBC's cancelled superhero series Heroes. A Halo feature film has been in development hell for years now; it's not clear whether a TV series moving forward will permanently put the brakes on that project.