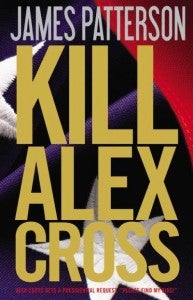 Making comics out of your books is, it seems, big business these days--even for some of the most celebrated and successful authors in their fields. This week, if you walk into a bookstore anywhere in the country, you can find a pair of new releases from bestselling writers who have a great deal of experience with comics--but the books themselves aren't comic books. Each of the men have built a strong following around their work, in part by crafting themselves into a character outside of the pages. Both Palast and Patterson (see ad link below) can be seen donning trench coats and talking like a character out of one of their books in support of what they write.

As you may have heard, or seen in Barnes & Noble's new ad for the Nook Tablet, thriller writer James Patterson has a new book out this week, titled Kill Alex Cross. Patterson, one of the most prolific and best-selling writers of his generation, has written or co-written a number of graphic novels or comic book miniseries in recent years in hopes of expanding his already-ample reader base. There have never been any graphic novels based on Alex Cross, the wildly popular title character who has driven Patterson to the top of the sales charts so often in the last few years. Still, with both adaptations of his existing work and original material written for the comics, Patterson joins an exclusive group including creators like Stephen King (who had a new release himself last week), Charlaine Harris, Janet Evanovich and Dean Koontz who have done so.

Ted Adams, CEO of IDW Publishing (with whom Patterson has his comics agreement) called the writer "a creative genius" in an interview with USA Today (linked above). "When you look at the variety of books that he's created over the years, you know you're talking about someone with real vision," Adams said. 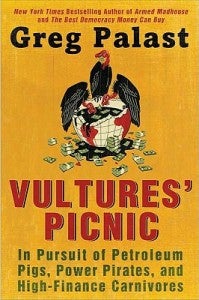 Investigative journalist Greg Palast, meanwhile, uses his new book Vulture's Picnic not only to stretch the definition of an ebook (the audio-and-video "amplified" version available at the websites for Barnes & Noble and Amazon is the first time that such a production has been put together by mega-publisher Penguin), but pushing the boundaries of journalistic nonfiction. In the same way that Hunter S. Thompson made us reimagine that genre with his immersive, stream-of-consciousness works like Hell's Angels and Fear & Loathing in Las Vegas, Palast creates a new subgenre all his own for Vulture's Picnic: Pulp nonfiction. The story of Palast and his crew, and their myriad recent investigations, Palast's new book is full of true stories, truth-is-stranger-than-fiction tales and the kind of arcane conspiracies that would be dismissed as silly if they were written into a work of fiction (that hasn't stopped some people in the past).

Palast has been responsible, to one extent or another, for some of the most talked-about news videos to hit the Internet in recent years. It was his book that provided University of Florida student Andrew Meyer with the research he was citing when he was famously tasered by university police at a John Kerry speech. Before that, Palast famously scared away Clayton Roberts, a high-ranking official in the office of the Secretary of State in Florida when he presented incriminating documents relating to the way the office had handled the 2000 Presidential election.

An expert on voter suppression and election fraud, what's Palast's claim to comic book fame? He co-wrote (with Robert F. Kennedy, Jr.) a one-shot comic, titled Steal Back Your Vote. The work, which was drawn by Ted Rall, Lucas Ketner and Lloyd Dangle, was sold using a name-your-price platform from Palast's website, and also reprinted and distributed with copies of The Nation magazine in October of 2008.

And, what's all of this building to? At right, you can see a page published in the back of Vulture's Picnic, announcing that Greg Palast has begun work on "an investigative comic book series" based on the stories told in this week's book, for which Transmetropolitan co-creator Darick Robertson has drawn the initial promotional image. Zach Roberts, Palast's editor on Steal Back Your Vote, has returned for this project along with an associate editor. Full disclosure, here: ComicBook.com writer Russ Burlingame (that would be this reporter) is that co-editor.

The comic is in the earliest stages of development, and the Palast investigative team are looking for a digital release sometime in 2012. A print version of the book will be forthcoming, but the Palast team are still talking to publishers and haven't decided on a final plan at this time. Stay tuned to Palast's website for more information.