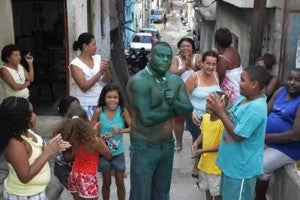 A new article posted at Helablog tells the exasperating story of a man who, in the words of the piece, dressed as Marvel's Incredible Hulk but now cannot change back to "human form." MC Marronzinho, a musician from Vila Cruzeiro, Brazil, bought some body paint labeled for cosmetic use and painted himself up as the Jade Giant for a Peace Race in his neighborhood. Upon arriving home, though, he found that the "cosmetics" were actually some kind of green ink that he's been unable to remove. "I was happy to run in my community and show the world that we have good here, and disclose my work as a singer," relates a rough translation of his comments that accompanies Helablog's rather bleak photo essay on his plight. "Now I'm very sad, not knowing what to do. I am embarrassed by this situation." He says that even after hours spent scrubbing himself with soap and what appears to be a toilet brush, he was unable to substantially reduce the effects and that he now has to sleep on top of a plastic sheet that protects his bedclothes from being similarly dyed. The Red Hulk and She-Hulk were not available for questioning in the matter.