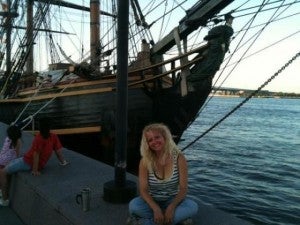 A replica of the famed British Royal Navy ship the HMS Bounty, which has appeared in numerous films and documentaries including two Pirates of the Caribbean films and the Marlon Brando-starring Mutiny on the Bounty, sank off the coast of North Carolina today, leaving one crew member dead and its captain lost at sea. The ship had left New London, Connecticut a few days ago in the hopes of making it to St. Petersburg, Florida ahead of the storm. It had been docked at Boothbay Harbor since September for maintenance. Claudene Christian, the crew member recovered by the Coast Guard, was taken to the hospital and later died, according to published reports. Due to the developing nature of the story, there are currently conflicting stories online, with others are saying that she's still alive, while still others say there is no information, but a CBS affiliate in Arkansas has reported that the Coast Guard confirmed Christian passed away. Christian is, in an odd twist of fate, reported to be a descendant of Fletcher Christian, who led the famous mutiny aboard the real Bounty. "A crew aboard an MH-60 Jayhawk helicopter from Coast Guard Air Station Elizabeth City, N.C., located Christian who was unresponsive, hoisted her into the helicopter and took her to Albemarle Hospital in Elizabeth City," according to the Coast Guard. "By the time we got there, the ship was submerged but it was upright and you could see the three masts sticking out of the water," said rescue chopper pilot Jane Pena.