Talking sales numbers for comics always makes me feel a little uncomfortable. I have a background in economics. That means that I like having lots of data before making any conclusions about anything. Unfortunately, there is anything but an abundance of information when it comes to sales numbers in comics. That doesn't mean it's impossible to learn something by examining the data that is available. It just means we have to be very careful and explain the leaps of logic necessary in order to draw any conclusions.

So let's start by looking at the data that is available.

And for the sake of accessibility, here is a graphic representation of those market share numbers provided by Diamond. 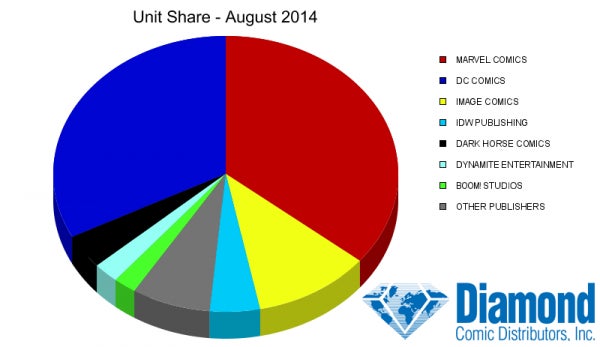 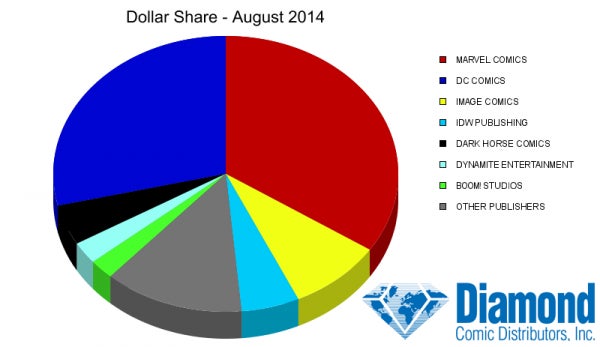 Before digging into the narrative of these numbers, it's worth addressing a few flaws. These numbers are reflective only of the comics purchased through Diamond by retail outlets. This is problematic for two big reasons.

First, the data only represents a very specific section of the market: comic book stores in North America. Comic book stores are still the largest section of the market, the majority of the North American market. This excludes all digital sales and sales outside of North America though. Digital has been estimated to compose between 8% and 15% of print sales. That is a pretty wide margin of error and a lot of comics, whether you lean towards the low or high end.

These numbers paint a picture in broad strokes. A month-to-month comparison of total sales or a comparison between specific titles is far too specific to make any valuable conclusions with what we have here. However, those broad strokes can provide a sense of what is happening in the long-term and that is still plenty valuable. It's also the big "story" found in the August sales numbers.

That story is Image Comics.

In August 2014 Image sold 10.97% of all units. This makes them the third largest publisher of comics in the North American marketplace. The largest and second largest are Marvel Comics and DC Comics having sold 35.85% and 32.56% of total units, respectively. There's still a wide margin between these competitors, but consider each publishers market share five years ago in 2009.

At the end of 2009, Marvel Comics had sold 45.63% of total units, DC Comics had sold 32.22% and Image had sold 3.25%. Only one of these publishers has experienced significant growth in market share during that time. Publisher Eric Stephenson has not been shy about Image Comics' expansion. At the most recent Image Expo held before San Diego Comic Con, he shared a graph charting the company's growth in sales over the past five years. 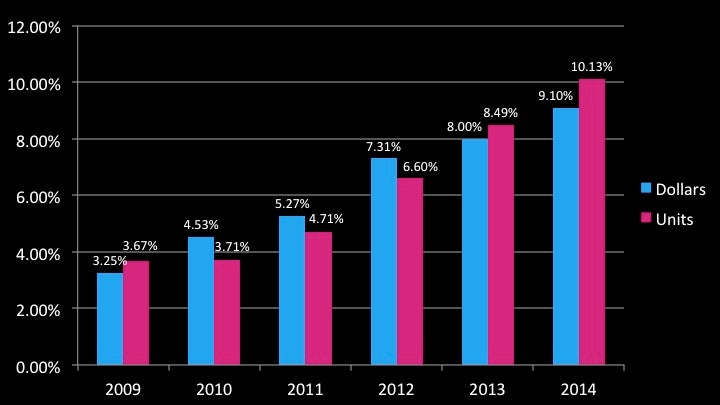 That chart speaks for itself. Big, continuous growth, year after year.

It's also worth noting that Image Comics is publishing significantly fewer titles than its two largest competitors. In August, they published a total of 63 new comics and 5 new graphic novels for a total of 68 distinct units. That is about 40 fewer titles than either DC or Marvel. It's also only 10 more titles than IDW, who sold the fourth most units in August, but only controlled 4.67% of the unit share. Image Comics sell better on average than those of any other publisher except for Marvel and DC.

Continuing the comparison to the year 2009, Image is publishing more titles now than before. In the best comparable period in 2009, they published 42 distinct titles. That means they have increased their total units sold in a typical month by 38% while increasing their market share (in an expanding market) by 176%. Image is not just continuing to sell more comics, but their titles are generally selling more over time.

The continual growth at Image, year after year, is hard to argue with. Image has increased the number of comics they are selling every year since 2009. They are becoming a larger and larger slice of the pie chart Diamond publishes each month. In and of itself, that's just information. The interesting question is: Why?

I have some guesses, but they are speculation. The numbers are limited to telling us that Image is growing. Observation and experience will have to be our guide when discovering what the publisher is doing right. I believe the answer is two-fold: quality and diversity.

Image prides itself on the high quality of all of its publications. Semi-annual Image Expos are used to show off upcoming releases and the top tier talent associated with them. There are plenty of unknowns discovered there as well, but few receive the kind of attention that a popular writer like Jason Aaron or Matt Fraction does when announcing new titles. The consistent quality of a large array of titles has also helped to create an Image brand – one that assures readers they can expect Image comics to be consistently better than the standard fare.

That same array of titles is, in addition to being well crafted, also very diverse. What I mean by diverse is not limited to a single factor. The characters, stories, and settings all reflect a wide variety of experiences. Image publishes comics that can be classified as science fiction, fantasy, horror, slice of life, superhero, and a number of other genres, unlike Marvel and DC, which primarily focus on the superhero genre.

This second factor I believe to be every bit as important as the first, if not more so, because it opens the door to new readers. Readers have a variety of tastes; not everyone loves the same things. In every successful narrative medium a diverse number of types of stories can be found. Yet in comics, the majority of stories are about the same concept. Image may be attracting more readers simply by offering quality comics that are about something besides superheroes. In doing this, they are capable of not just shifting the market share, but growing the entire market.

It is estimated that in 2012 Americans spent about 10.9 billion dollars on movies and 15.4 billion dollars on video games. In 2012, Diamond sold 518 million dollars of comics to comic stores. Even accounting for digital sales and sales abroad, that number does not come close to 1 billion. Comic properties may be big business for Hollywood, but comics are still a small business. The name of the game isn't control of the current market; it's growing that market. No publisher is showing the same skill or efficiency in playing that game than Image Comics.

The story is not that Image is successful, but that it appears to be expanding its audience. That's what I think these numbers are saying and, if I'm right, the rest of the industry needs to start paying attention to what Image is doing right. Comics are an inherently creative medium that is too powerful to be restricted to a small readership.

I would like to thank John Jackson Miller at Comichron and Charles LePage at ComicsList for their invaluable help in assembling the data used here. Without their dedication to assembling statistics, sales figures, and lists on a monthly basis, even the most rudimentary assessment of industry trends would be almost impossible.

Image Comics: The Story in the Numbers