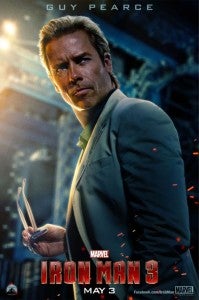 In an appearance on Sunrise in Australia, Guy Pearce talked about his character Aldrich Killian in Iron Man 3. When asked if his character was a villain, Guy Pearce responded, “Well, I can’t really say. It’s a bit of a twist to the story, so we must keep that under wraps, I guess. But I do have a bit of an ulterior motive. I may look charming and dashing on the screen, but he’s not all that he seems.”

In regards to Robert Downey Jr., Guy Pearce said, “I was surprised because I was a little nervous that he was going to be kind of hyper and super energetic all the time, but he’s really chilled actually. He’s great, and when he gets going, when he’s kind of thinking of ideas, he’s really brilliant.”

Iron Man 3 is set to be released at movie theaters in the United States on May 3, 2013.

Iron Man 3: Guy Pearce’s Role To Have A Twist