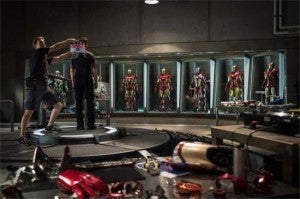 There's been some speculation floating around for about a week now that, due to the fact that Iron Man 3 is a co-production with the People's Republic of China, there may be a censored version of that film that will screen in China, downplaying the role of The Mandarin, Ben Kingsley's criminal mastermind who in the comics is Chinese. That's probably fair, since the film's director, Shane Black, dismissed the character as a "racist caricature, back in the days before it was announced he was the movie's villain.

Now, both Business Insider and io9 are speculating that this role could be either cut severely or removed entirely, possibly paving the way to greatly expand the role of a minor villain, or introduce a new one entirely, to appease the Chinese censors.

Business Insider speculates that perhaps Guy Pearce's character, Aldrich Killian, could be depicted as the central villain of the film--at least in the Chinese version. That would run counter to what Pearce has said about his role being "basically a cameo," although obviously it's possible he was only telling the press that to throw fans off the scent.

In addition to run-of-the-mill censorship, films have had a history of being altered to fit the Chinese market. That's particularly with Chinese co-productions like Iron Man 3. According to io9, both Looper and Men in Black 3 were altered significantly, with the scenes shot in China being greatly expanded for Looper and a potentially inflammatory sequence in Men in Black 3 being trimmed way down.

The relationship with China on Iron Man 3 has already been tested; Shane Black's comments at Comic-Con that none of the principal cast would go to China and that they weren't "really" going to film there at all weren't exactly an olive branch, and there's been some speculation in the Chinese press that the film could lose its "co-production" credit and some of the government money that comes with it. All the while, U.S. professionals have complained that the production would offshore production and music to non-union jobs overseas to begin with.

Iron Man 3: Will There Be Multiple Cuts?