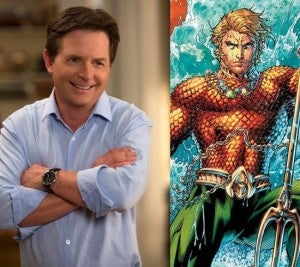 Thursday night was a big night for Aquaman on television. The popular DC Comics character was mentioned on not one, but two different big comedy show premieres. On The Big Bang Theory, Sheldon at first took a jab at Aquaman, but ultimately wound up buying an Aquaman statue for $1,200.

In regards to his Parkinson’s medicine, Fox wished that the side effects were cooler. When his wife asked for examples on cool side effects, Fox said like “anything Aquaman does.” Later in the episode, when Fox and his wife were disturbed by a noisy neighbor, Fox made the comment, “I bet this never happens to Aquaman.”

While it might just be a coincidence, there is a reason that Michael J. Fox could be an Aquaman fan.  Norman Alden, who was the voice of Aquaman in the Super Friends TV series, appeared with Michael J. Fox in Back to the Future. Alden played Lou, the diner owner in Back to the Future. Alden passed away last year at the age of 87 from natural causes.