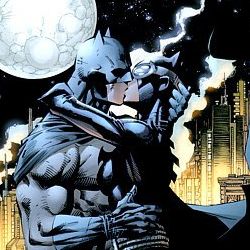 After examining the wonderful and true love of my last article's 10 comic book couples, it seems only fair, in these modern times with their new-fangled rules and codes, to examine 10 other relationships that are a bit more …shall we say, hard to sort out? These 10 couples are not known for taking the smooth and easy road to lover's lane, and perhaps have even tried to kill or maim each other on the way. It's been evident in their history that they may never get it sorted, but they'll always be compelling.

1. Batman and Catwoman - In their alter egos of Bruce Wayne and Selina Kyle, there has been recent development in an actual relationship, despite all of their history. Both characters pursued the other for years; Batman after her for her criminal history, Catwoman in pursuit of a conquest/ally to bring to her side. There was always an attraction between them, but with each having their own set of rules, neither was willing to cross to the other side. After Batman reveals his identity to her in "Hush", a relationship now seems possible; will Bruce live to regret that decision, knowing the nature of Catwoman's behavior, and with recent events in "Batman R.I.P", how long will it last?

Despite the fact that today many fans know their story and root for them avidly, Kitty and Peter had a very, almost illegal relationship when they first met. After some "just friends" behavior for years,and after she reached the legal age of consent, Kitty and Colossus were on/off, until Colossus' apparent death. With his return in Astonishing X-Men #4, he turned Kitty's world upside down yet again, as evident from her stunned, stock-still reaction in that issue. They eventually worked out their differences, yet again, only to now have Kitty disappear (for good?). Whether or not she will return from space remains to be seen, but needless to say, it's only one more strange turn in an already strange relationship.

- While Janet stuck to the code name The Wasp for years, the good Dr. Pym underwent name changes such as Ant-Man, Giant-Man, Yellowjacket, etc. That's not the only thing that changed. After an initial sweet, Silver Age romance, the couple get married, and not with both of their heads clear, Hank suffering from a chemical-induced delusion at the time. As his mental breakdown worsened, Hank unleashed one of the most infamous scenes in comics history; he physically attacked Janet. Their relationship would be off and on for years after this event, and sadly with Janet's death in Secret Invasion, it's clear that perhaps the off again is now for good.

- As mere humans, Hal Jordan and Carol Ferris were both dashing, daring young people hot for one another. As Green Lantern and Star Sapphire however, things were a bit different. Seeing that Carol loved Hal, those pesky Zamarons, a race who bestowed otherworldly powers to women, chose her to pursue the Green Lantern in the form of Star Sapphire. Green Lantern always managed to subdue her and return her to Carol, but their relationship over the years waned until recently. Carol has divorced her husband Gil, all in the plans of getting Hal back. Who knows if these two will have to fight for and/or against each other in the future!

- Talk about hot and cold! These two, after initial disgust on Dinah Lance's part at meeting the Emerald Archer for the first time, developed one of the more physical and complicated relationships in the DC Comics Universe. They were on and off several times, due in large part to the wandering eyes, lips, hands and more of Oliver Queen. After seeming to clean up his act and Dinah feeling like she could trust him again, the two are married. Even that is complicated by a shape shifter and some Amazons, but all, for now, seems to have worked out well for these two. Not too bad for a couple of characters who seem capable of going toe to toe with one another in a fist fight!

- Not only does Colossus have trouble in the regular Marvel U in matters of the heart, his Ultimate counterpart can't catch a break either. Northstar makes the first move in this case, and young Peter can only turn to steel in stunned response. Just as any relationship they may have begins to move forward, the Brotherhood shows up, resulting in Colossus living with Northstar for a brief period. After a kidnapping adventure, Colossus is thrown a curve ball when his boyfriend is found to be misusing the drug Banshee, resulting in a loss of use for the lower half of his body. This may be one of the newer couples in Marvel, but they certainly aren't one of the smoothest and easiest to follow!

7. The Joker and Harley Quinn

- This girl couldn't take 'he's just not that into you' for an answer. Falling in love instantly, Dr. Harleen Quinzel pursued a romantic interest in him in the guise of Harley Quinn. After she herself is committed to Arkham, of course. Over the years, the Joker and Harley have abused, attempted to kill, maim and torture one another, all in the name of some kind of affection. Harley says that she's now over Mr. J, but time will tell. We've heard and seen that statement before, usually with encouragement from Poison Ivy. The one constant in the minds of these two psychopaths is that the other will always be there, in some sick, twisted fashion.

- You see what complicates things with couple number one? A baby mama! Damian Waye/Ah Ghul (?) is alleged to be Bruce's son, which knots up an already knotty relationship. When you're the sworn scourge of criminals everywhere, what do you do when one of the world's oldest, most nefarious criminals pushes his intriguing daughter on to you? You have an over 30 year flirting, and it looks like mating, ritual. It's doubtful that much more will come of this relationship, Batman's 'death' may have a lot to do with that, and while Bruce always stayed away from totally aligning himself with Ra's al Ghul, he could never fully stay away from Talia.

9. Dr. Manhattan and The Silk Spectre

- Two of the three sides to the love triangle that plays a bit of a role in Watchmen, Jon Osterman and Laurie Juspeczyk help to combine the realms of the super and the human in their relationship. As Dr. Manhattan, Osterman has become a detached, yet powerful figure, and Laurie is his frustrated and emotionally starved companion. Over the course of the story, both characters undergo transformations that humanize and mold them into the people they will be at the end. There is love between these two, beautifully depicted throughout, but in the end both get the kind of release and validation that moving on is never a terrible thing.

If only there was an easy way to date a gamma-irradiated superhero. When her new boyfriend Bruce Banner was exposed to radiation that turned him into the Hulk, he tried to keep it from her, driving her into the arms of another. Although that marriage wouldn't last, Betty and Bruce never could seem to just be together. Attacks from MODOK, Abomination and the Leader were sure to happen, and their marriage would be short lived. It seems that Betty is indeed deceased, although previously thought otherwise. Their story goes to show that love is never easy for anyone, especially the green, easily hated type.

It's Not You, It's Us: 10 Complicated Comic Book Romances