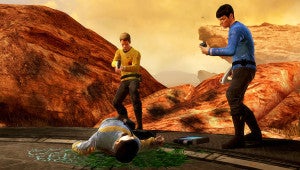 In a new interview with Gamerhub, in which he discusses various projects he's got going on with game developer Valve, Star Trek Into Darkness director J.J. Abrams admitted that he was frustrated with the most recent Star Trek video game--a project that he had been involved directly with in the early going before bailing when the project seemed headed in the wrong direction.

''The last game, which is obviously a big disappointment to me, was something that we were actually involved in at the very beginning of it," Abrams says in the interview embedded below. "Then we sort of realized that it was not going in a [direction] that we were going to get what we wanted. So we dropped out and they continued to do it despite, you know."

He criticized the gameplay and said that the game "emotionally hurt," because "we were working our asses off on this movie" and along comes a video game that was universally panned.

"It was something that without question didn't help the movie and arguably hurt it," he added.

You can see the full interview below.