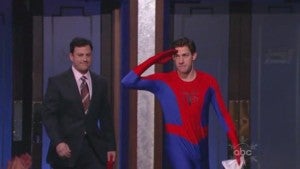 Tuesday night, just around the time comic book stores are hosting midnight release parties for the release of Uncanny X-Men #1--the first of the Marvel NOW! relaunch titles--Marvel Comics Chief Creative Office Joe Quesada will appear on Jimmy Kimmel Live, ABC's late-night talk show. While it's the first time that Marvel and Kimmel have "teamed up," ABC is of course owned by Disney, the same network that owns Marvel. "First Jimmy Kimmel rocked the Emmys in front of the entire world and now he's set his sights on the Marvel Universe," said Quesada. "I'm looking forward to meeting with him to see just what he has planned for the Avengers, Spider-Man, Wolverine or whichever of Marvel's Super Heroes interest him the most. But this is Marvel NOW! and we're going to need the biggest ideas to compete with what we've planned! One things for sure—you've never seen Marvel on TV like this before!"