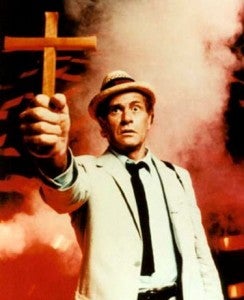 Nobody plays somewhat quirky and unusual characters better than Johnny Depp, so this latest movie project for Depp sounds like a match made in heaven. During the seventies, there was a great TV series called Kolchak: The Night Stalker which was a combination of supernatural, science fiction, and horror all wrapped into one show. Before the TV series, there was also a novel and two made for TV movies. Kolchak: The Night Stalker TV show starred Darren McGavin as tabloid reporter named Carl Kolchak, who covered crime that often involved the likes of werewolves, vampires, zombies, aliens, and even a lizard creature. The TV series only lasted for one season, but it has developed quite a cult following. There was an attempt to bring the show back in 2005 with Stuart Townsend playing Kolchak, but the new series didn't last for very long. There was also a Kolchak: The Night Stalker comic book series published by Moonstone Books. Deadline reported today that Disney has signed Edgar Wright to direct The Night Stalker with Johnny Depp to play the role of tabloid reporter Carl Kolchak. The movie will also be produced by Depp with Infinitum Nihil partner Christi Dembrowski with David Kennedy as executive producer. As a huge fan of the original Night Stalker, I think Disney couldn't have done a better job picking a director and star for a Night Stalker movie. Edgar Wright was the director behind Shaun of the Dead and Scott Pilgrim Vs. The World, which were two very good movies. There is no writer named yet for the project, but with Depp and Wright involved, I'm sure Disney will be able to land a great writer for the script. Reportedly the movie will be rated PG-13. It is being developed by Disney after all. Another interesting tidbit for comic book fans, Edgar Wright is the same director who has also been attached to direct an Ant-Man film for Marvel Studios, which is now owned by Disney. If Wright makes a hit with The Night Stalker, then maybe we will finally see more movement on the Ant-Man movie.

Johnny Depp To Star In The Night Stalker Movie