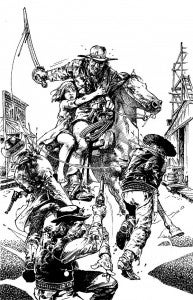 Tony DeZuniga, the artist responsible for first crafting Jonah Hex's ghastly visage in an old issue of Weird Western Tales, had a stroke last week in the Phillipines and is now in "extremely critical condition, according to reports. Legendary Batman artist Neal Adams is among those reportedly trying to put together a collection to help DeZuniga and his family with medical expenses.

Terry Allen at ComicArtCommunity.com posted a message to fans yesterday, passing along a message from DeZuniga's wife and asking fans to contribute what they could. The message from Tina DeZuniga is as follows:

It’s really tough since Tony doesn’t have insurance here. The medication is very expensive and hospital bill is paid cash 90% Our daily bill is around $1,500 even if we have some money it’s drained out already. I have a house here but the process of getting a loan would take time and I can’t be gone long away from the hospital. As for Tony’s condition, I will give you a brief history and update – he had a stroke in the morning of Tuesday last week (we’re 16 hours ahead) The stroke damaged the brain. it has bleeding inside and they need to open up the brain but with so much medication they were able to stop the bleeding but the brain was swollen so they need to take the pressure out so they need to insert a tube to release the pressure but since I don’t want them to open up it created an hernia. His condition is so unstable. He got infection that they need to treat, his pneumonia, need to be watched because he’s having problem breathing and blood pressure on top of the heart. With too much medications his stomach bleeds. One on top of the other. Anyway. Any little help will be greatly appreciated.

It's a problem common to comic book creators, whose work is mostly for-hire, meaning that they're never employees of the companies and don't have benefits or earn money toward a pension. Nonprofit organizations like the HERO Initiative have been set up to help creators, but whenever there's a sudden, catastrophic event in the life of an old creator, it seems to fall to fans and friends to lend a hand.

Adams, a key player in the creators' rights movement since the 1970s, often sets up charity auctions of original art and other such things on eBay or at his website. Most recently, he set something similar up to help Ghost Rider co-creator Gary Friedrich with his medical and legal expenses after the writer was forced to pay a fine to Marvel after an unsuccessful attempt to recover the rights to the character.