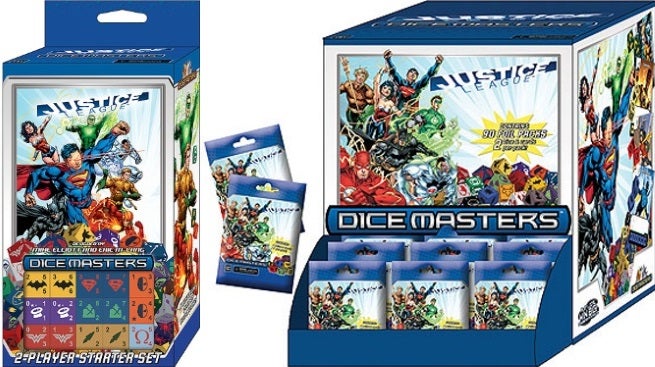 WizKids Games has announced DC Dice Masters – Justice League, the inaugural set of their DC Dice Masters collectible dice game, via Game Trade Magazine. The set was previously revealed to retailers, but GTM has the first details on what products will be included in the sets launch, and the first previews of some of the new cards from the set.

The set features heroes and villains from the DC Comics universe, including members of the Justice League (including Superman, Batman, Wonder Woman, Aquaman, Martian Manhunter, Cyborg, The Flash, and Green Lantern) the Justice Society (including Stargirl, Red Tornado, and Hawkman), and the Legion of Doom (including Black Manta, Brainiac, and Lex Luthor).

The set offer a two-player starter set, which gives players everything they need to start playing with a friend, and includes characters like Superman, Wonder Woman, Batman, Zatanna, Martian Manhunter, Green Arrow, Darkseid, and Deathstroke.

The set will also be available in booster packs, where players will receive random cards and dice. Players can try their luck at opening up one of the four super rare cards from the set, one each based on Black Canary, The Flash, Catwoman, and Constantine. 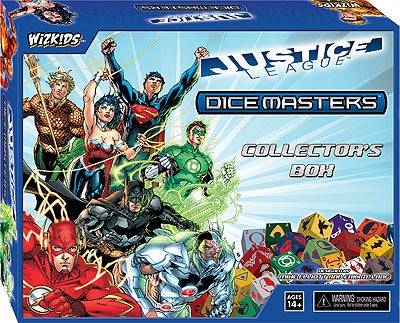 Though this is the first set in WizKids' DC Dice Master line, the set is fully compatible and features identical rules to the two already released Marvel Dice Masters sets, Avengers vs. X-Men and Uncanny X-Men, and the upcoming Avengers: Age of Ultron set. This means you can create teams that include members of the Justice League, the Avengers, The Legion of Doom, and the X-Men, all working together to defeat your opponent.

DC Dice Masters: Justice League will hit game store shelves in March 2015. Check out the gallery below to see the previews of Batman, Wonder Woman, and the super rare "Constantine – Hellblazer" card.