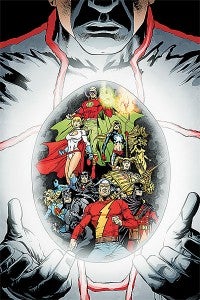 Writer Bill Willingham has been behind some of the biggest happenings in comics over the past few year, notable his creation of the Vertigo title Fables, which has become a hit among fans and is constantly discovered by new readers. Willingham, along with writer Matthew Sturges, of Blue Beetle, take the reigns of one of DC's most expansive rosters, the Justice Society of America! JSA #29 is the jumping off point for the Willingham/Sturges run, and with art from Jesus Merino, the first issue of this run is a notable and impressive start! With a few one-off issues building up to this current run, the introduction of a mystery, a villain ambush and the addition of two new members is a great way to begin this current run! As the team approaches a mystery involving member Obsidian and his odd new form, newest members All-American Kid and King Chimera begin their transition into the team, with both members already having their distinct personalities established, All-American Kid as a plucky and rosy-cheeked good kid and King Chimera as, well, a bit of an arrogant snot! The touches of dialogue between these two new teammates and roomates are distinctly Willingham, as a touch of humor subtly slips into their meeting. As an emergency call goes out, Wildcat finds himself called out by lowly villain Tapeworm, who promises death to hostages if Wildcat doesn't show himself to face him one-on-one. What follows are some of the best pages of action the series has seen in awhile, with Merino's art and Allen Passalaqua's coloring setting up an ambush of our heroes, who find themselves staring down a carefully chosen roster of villains, designed to counteract the JSA's combined might. A frame-by-frame sequence, narrated by the Flash, shows Power Girl, Judomaster and Green Lantern up against the likes of Blue Moon, Blackbriar Thorn, and Eclipso, villains who don't usually fare too well on their own, but combined prove to be more than a match for our heroes. As this battle rages on, Mr. Terrific, back at the JSA brownstone, pulls double duty by policing the two newest members and hoping to get to the bottom of the mystery surrounding Obsidian. A sudden, and unexpected attack, finds him in grave peril, and leaves us wanting the next issue to come out tomorrow as opposed to a month from now! This issue celebrates so many of the things that have made JSA great over the years, but what Willingham and Sturges have done is to craft a very clear and focused introductory issue for this current story arc while not sacrificing the action and adventure that is so core to this team. Several surprises and returns are in store for readers who stick with Willingham on this run, and coupled with amazing art, it's certain that this will be one of DC's series to watch over the coming months!