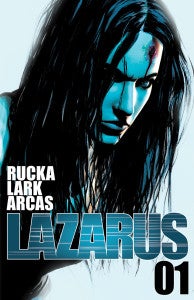 Greg Rucka and Michael Lark's Lazarus, one of the best-reviewed new series of the year, has sold out at Diamond Comics Distributors the day after it went on sale. The first issue will go back for a second printing, which will be available on July 24, the same day Lazarus #2 hits the stands from Image Comics. Copies are available now at ComiXology, of course. The story of Forever, an apparently-immortal young woman, who was created as a lethal bodyguard and enforcer for the powerful Carlyle family, LAZARUS is set in a society that is at once highly futuristic and regressively feudal. Concentrated wealth and technological knowledge has put a few families in control of the lives who those who work for them, and Forever's job is to maintain her family's hold on power. "I'm not sure I'd claim that we've hit a particular chord or social note, but I do think Michael and I are talking about — at least as backdrop — a scenario driven by some very real-world concerns," said Rucka. "Not that we're all headed to a genetically engineered future, or that the economic situation will become as dire and dark as we've painted it; but the fact is, we're living in a very unstable world, and economic instability is part of that, despite recent gains. I have friends who are worried about where their next meal is coming from, whether or not they'll be able to fill their gas tank, never mind their concerns for their future and the future of their children. That's our reality right now, and it doesn't take much imagination to extrapolate that to its worst."

Peacemaker Just Name-Dropped One of DC's Most Bizarre Superheroes