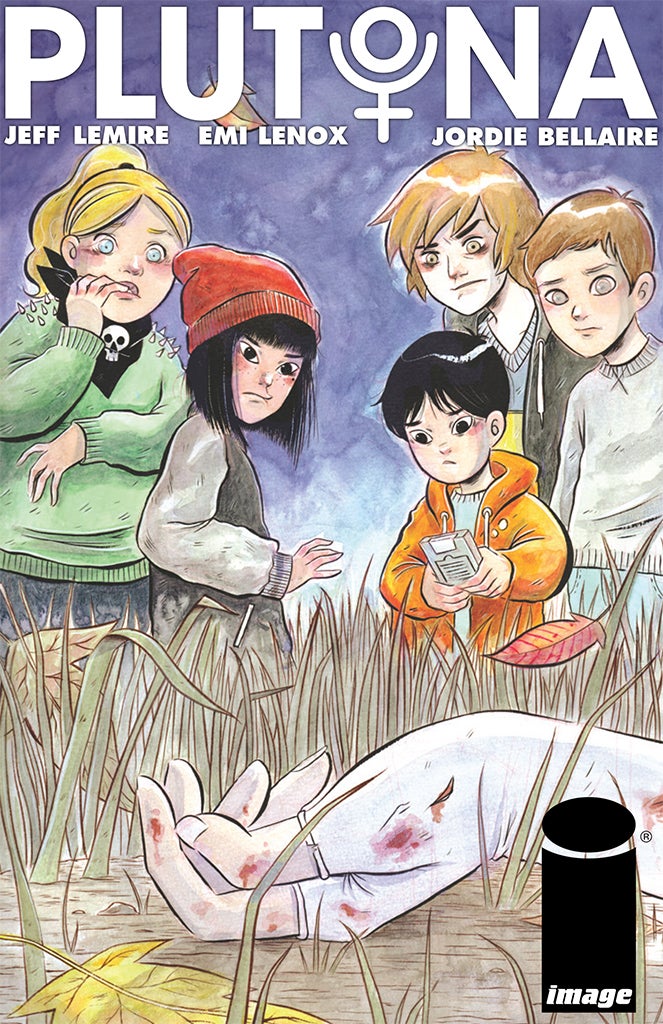 A new five-part mini-series entitled Plutona was announced today at Image Expo in San Francisco. The mini-series will be written by Jeff Lemire (Sweet Tooth, Essex County), drawn by Emi Lenox (EmiTown), and colored by Jordie Bellaire (Zero, Moon Knight). I had an opportunity to speak with Jeff and Emi together about their upcoming project at Image. We discussed the story's origins, how it connects to their previous work, and what they hope to achieve together. Emi also shared some early sketches from the comic. Plutona is one of the most exciting new projects to be announced at this year's Image Expo and I think the art and conversation below will reveal why that is.

Chase Magnett for ComicBook.Com: There's a brief press release for your new mini-series Plutona at Image that is being unveiled this Thursday. Would you care to describe the series in your own words?

Jeff Lemire: It was initially Emi's idea. She told it to me and that's how I became involved. So I think she should probably start.

Emi Lenox: It's about a group of kids who run into the dead body of a superhero in the woods randomly, then what they decide to do with that body and how it affects them.

Lemire: It's part of a tradition of stories that Emi and I both really enjoy, like Mean Creek and Stand By Me, where you have this group of kids who are confronted by something very dark and outside their experience. This thing it changes them and they aren't equipped to deal with it because they're children. It takes them them on a dark path and you get to follow them. The superhero stuff and more fantastic elements of the world are really background. The book itself is very focused on these five kids. It's a very character-driven story.

Magnett: Can you give us a sense of what these characters are like, how they know and interact with one another?

I think that's really interesting too. You put a group of people together who aren't used to being together and then put a very dramatic, intense situation on top of that. You see how they react and relationships form for the first time. That's the fun part of exploring the group dynamic for me. 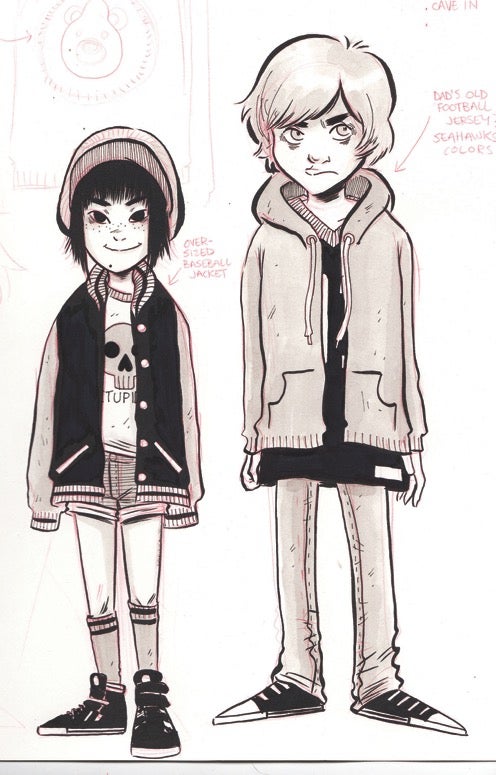 Magnett: Emi, this was originally your idea. When did you first start thinking about Plutona?

Lenox: Honestly, I first thought about this idea in 2003 and never managed to do anything with it until now. When I was a kid I used to watch Batman: The Animated Series all of the time and anytime Batman looked like something shitty was going to happen to him I would get really excited. That sounds twisted, but I wanted horrible things to happen to Batman and they never did. This idea is playing with that hope that a superhero could die.

Magnett: And then at what point did Jeff become involved and start to collaborate?

Lenox: We've always wanted to do a project together. It's something we've talked about a lot and, like Jeff mentioned earlier, this touches a lot of themes that we both really enjoy: dark stories, children, sadness, and messing with innocence. So when I told him the idea, we just started vibing with it and it turned into what we have now. I am super stoked.

Lemire: It really came together at San Diego [Comic-Con] this year. I don't remember if Emi was telling me about this for the first time or if she had brought it up again, but we were just having a conversation about it over coffee. The conversation turned into us breaking down the story together and then we we realized we were working on it together and got excited about it.

The concept is interesting to me. I've done some straight superhero stuff for DC and this is approaching superheroes from a completely different angle. Those elements, the superhero and science fiction aspects of the world are really background. They aren't the main focus of the story as opposed to the stuff I've done in the past. Superheroes die in superhero comics all of the time, but this is very different because it's such a grounded story. We always see these superhero deaths and see other superheroes reacting and it goes on and on. This is looking at how real people react to these fantastic beings existing in their world, and using them as a reflection of their own mortality. It's pretty interesting for me to explore superheroes from a different angle like that.

Lenox: When I thought of the idea a long time ago, it was because it would be more relatable to me because I could never be a superhero. Maybe in another world they existed though, and I could imagine what it would be like if I ran into a situation like this. It puts you in a spot where you can relate more.

Magnett: You were friends long before you ever started working on Plutona. How did you originally meet?

Lemire: It was maybe seven years ago. Emi was an intern at Top Shelf when the last of the Essex County stuff was coming out. I think it was San Diego one year when I was signing books at the table, she was interning and I saw her stuff. We struck up a conversation and a friendship, which has grown since then. 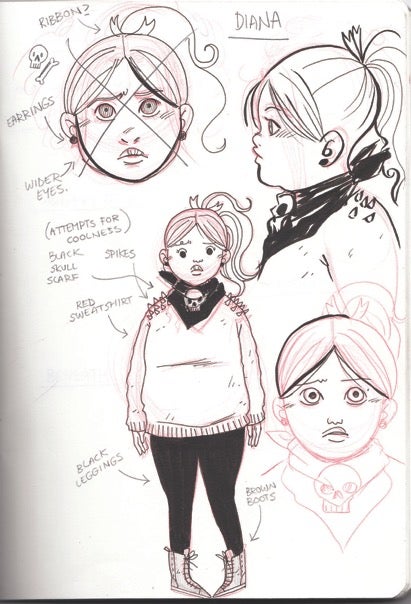 Magnett: One of the things I noticed in looking at the premise is that idea of relatability you both mentioned. Both of your independents comics are very grounded in the human experience. It also shares a connection with a lot of Jeff's previous work in comics like Sweet Tooth and Essex County in that it focuses on adolescence and childhood trauma. What is it about those themes that draws you to stories like this?

Lemire: I've always been drawn to telling stories about kids. I'm doing it again with my other Image book Descender. I don't know why I'm so drawn to wanting to tell stories about children. I have a real knack for it; I can get in their head and capture that voice. You don't want to psychoanalyze yourself too much with these things. But maybe it goes back to the first time I read comics, that I fell in love with comics, and that I was transported to different worlds through comics I was a kid myself. There may be some connection there. I don't want to go too far in analyzing things because the work itself is how I generally process stuff.

Lenox: I don't have a published library like Jeff does that shows this type of thing, but I feel like with kids up through the teen years or even early twenties there's so much that goes on. There's more freedom.

Lemire: When you're young, especially when you're a kid, but even into your early twenties when you reach adulthood, everything has so much more importance. Every little event has so much more weight. All of the dramatic elements of the story have so much more emotional meaning to these characters. The smallest things that you don't have time to worry about as an adult can be so dramatic and life-changing.

Lenox: You're numb by the time you're an adult to all of the death in the world and all of the heartbreak. When you're young it means everything. It's like discovering who you are and how you handle things for the first time. Once you're an adult, you already have a grasp on how to deal with things emotionally.

Magnett: One other thing I noticed is that looking at EmiTown, which as a memoir is a very different style of comic, both your art and compositions lends itself very well to telling personal narratives. Is that something you hope to bring to Plutona? 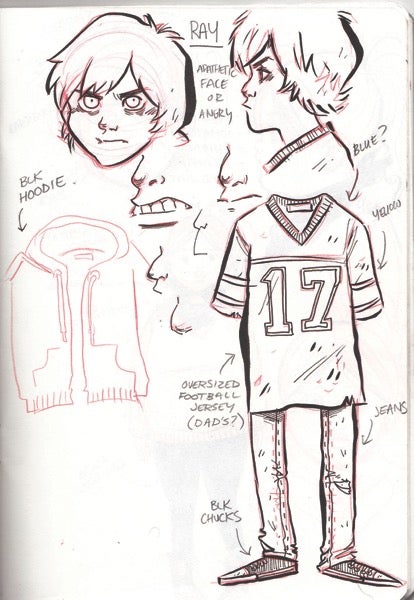 Magnett: Looking at your character sketches, they're different from a lot of what you've done in your career so far. How are you pushing yourself to grow as you design and draw Plutona?

Lenox: I draw a lot and people don't see it. People mostly see my EmiTown work, which is very cartoony, but I actually draw in this way much more often. I don't put it out there though; I haven't had books to showcase it yet. That's part of why I'm really excited for this book. I can draw something outside of Charlie Brown anime-like things.

Magnett: This is also your first series from a mainstream publisher. How has this project been different from your previous work?

Lemire: I think it will be different too because whenever you're collaborating with someone it's not just one voice. It's not just Emi or I, the storytelling will be a mixture of both of our styles. By virtue of that, it's going to be different from anything either of us has done before.

Lenox: That makes me even more excited about it. It's just as much mine as it is Jeff's. I'm not drawing someone else's vision; it's both of our visions. 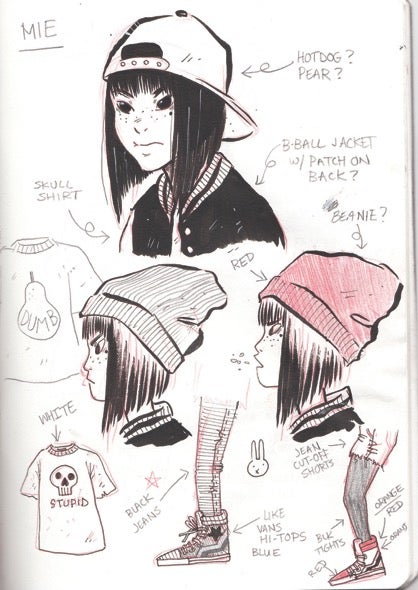 Magnett: You're also working with Jordie Bellaire who is coloring Plutona. Have you had much of an opportunity to collaborate with her yet?

Lemire: We have not gotten quite that far. The first script has been written. The series is broken down and we have all of our sketches done. That's about where we're at with it.

Magnett: Having the first script complete and preparing to announce the mini-series at Image Expo in a couple of days, what are you most excited about publishing Plutona in 2015?

Lemire: For me it's getting a chance to work with my friend. Emi is one of my best friends in comics and it's fun getting a chance to collaborate together. That aspect is just great. On a creative level, I think it's going to be interesting to explore superheroes free of all the continuity you have to deal with when you're working at DC. I'm looking forward to focusing in on character, taking my time with things, and not being so plot driven. And I'm excited to see a whole bunch of Emi art every month.

Lemire: EmiTown came out as two big books and there were long gaps between them, and she always has great stuff on her Tumblr. To see a monthly 20-page comic done in that style will be great. I'm really excited for her to have her work come out like that.

Lenox: I'm really excited for people to read it. I think this story kicks a lot of butt. I don't think I've ever seen anything like it and I'm super excited to see how people react. Also, I'm obviously excited to work with Jeff because he's my buddy and to draw and etcetera, etcetera.

Magnett: Thank you both so much for taking the time to discuss Plutona and share some of the artwork from the series with us. I can't wait for the first issue to come out.