We've seen plenty of controversy with the "Life With Archie" series from Archie comics over the past couple of years.  From the "Who is he going to Marry?" storyline to the recent Kevin Keller gay marriage episode, it appears as if the series has snatched whatever controversial topic it could to sell copies.  Now, there is another relevant and important storyline—but this one will have a mix of empathy to go with the controversy.  Cheryl Blossom has breast cancer, according to a story from the AP. Cheryl, who left Riverdale to pursue a film career in Hollywood, makes her return to the series in "Life With Archie" #21.  Though, as you can see, none of her family or friends knows she has cancer. 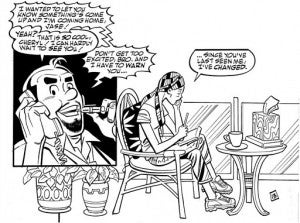 Victor Gorelick, Archie's editor-in-chief, says the story runs deeper than just a person having cancer.  After all, Cheryl has a lot of money. "One of the things that comes out is that she feels she's very fortunate that she can have all this treatment because she has medical insurance, the money, to be able to do it," Gorelick said. And that's where the controversy will come into play with the issue. Dipping into the political and moral realm, where folks can argue about things such as universal healthcare or whether or not healthcare is a fundamental right for all people.  Tackling these issues has driven a lot of sales for Archie Comics, but the question is—are they generating frank discussions which can generate change?  Only time will tell. "Life With Archie" #21 is written by Paul Kupperberg and drawn by Fernando Ruiz and Pat & Tim Kennedy.  The issue hits stands and digital this July.