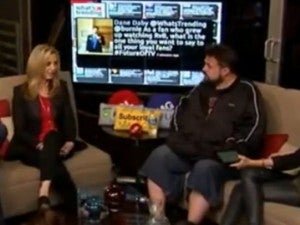 Last night, Comic Book Men's Kevin Smith and Friends' Lisa Kudrow appeared on the web show What's Trending. We've embedded the video below, which includes a clip from Comic Book Men. Kevin Smith also talks about the upcoming Short-Com show that he is starring in on FOX and Clerks 3. While we were watching to hear what Kevin Smith might have to say, the line of the night went to Lisa Kudrow. In a discussion on the importance of social media, Lisa Kudrow made the point that she didn't know what being big on social media translated into. Lisa Kudrow said, "I just know that Ashton Kutcher had eleven billion people following him then he did a movie and still no one went." As the crowd laughed and groaned, the other guests agreed, pointing out that his movie Spread opened at something like $35,000. Kevin Smith pointed out that while a lot of people might be happy to read Ashton Kutcher's tweets about his life, they might not necessarily be interested in seeing his movie after they hear what it's about. However, Kevin Smith also added, "I bought that movie though, because I read his tweet, so it worked on me. And I don't even follow him, man. Someone sent me his tweet, and I'm like, 'ooh, he plays a [hustler].'"

Belle: Behind-the-Scenes Video Discusses the Making of Its Virtual World