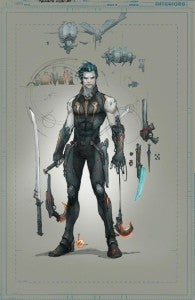 The most controversial retooling of any single character since the initial outburst of anger at the start of the New 52 hit the Web last week, with DC Comics unveiling a new Lobo to widespread fan criticism. The new look is accompanied by a story that tells fans "Hey, you know that guy Lobo who's been hanging around in books like Deathstroke and StormWatch? Yeah, that's not Lobo." The move generated a ton of discussion, prompted a response by the writer of the upcoming Lobo Villains' Month story (for which the redesign was done and origin tweaked) that included the phrase "I respectfully disagree with the decision to release that image" in reference to Kenneth Rocafort's character design at right. 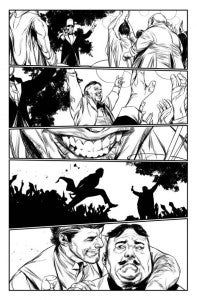 Speaking with Newsarama, though, Lobo's creator Keith Giffen made it pretty clear that he's not among those put out by the changes. Lobo was, after all, created as a parody of things that Giffen thought were wrong in comics at the time. Keeping the character unchanged even though the comics he inhabits have changed dramatically would be on the face of it a pretty odd decision. "Lobo was created to be an indictment of the very genre that he became a poster boy for," Giffen said. "That backfired on me viciously! I thought Lobo would be one mini-series and then, 'The End.' I thought he was that reprehensible." Giffen is of the impression that nuLobo is a bit more in touch with the things that deserve parody about today's popular culture. "I would think it's tied into more of today's pop culture, even though I'm not 100 percent sure what that means," Giffen said. "I saw the drawing and I just thought, the thing that ran through my head was, of course." "If you read online critics of movies or books or comics or anything, it almost always boils down to, 'that's not the way I'd do it.' Especially if they're really negative," Giffen added. "So I look at Lobo and say, 'that's not the way I would do it.' "But is it valid? I don't know! I haven't read it!...I wish them all the luck in the world. I had my say, and now it's time for somebody else." Justice League #23.2: Lobo by Marguerite Bennett and Ben Oliver is due in stores on September 11.

Lobo Creator Giffen on the Revamp: It's Not How I'd Do It, But It's Someone Else's Turn Now