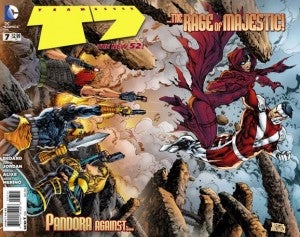 In the world of DC Comics's The New 52, not even Superman is universally loved and trusted. In spite of his apparent goodness, Superman's power scale makes him a terrifying potential threat, and some of mankind respond accordingly, up to and including members of the Justice League and the international governmental community. So it should be interesting to see how Team 7 deals with the perceived threat of (Mr.) Majestic, a Superman analogue co-created by DC Co-Publisher Jim Lee back during his WildStorm days. The second half of their gatefold cover for Wednesday's issue revealed, it now looks as though the WildStorm-heavy Team 7 (which primarily stars Deathstroke, Grifter and Black Canary)will find themselves trapped between Majestic--not seen in quite a while, even before the New 52 relaunch wiped out much of the WildStorm history--and another powerful character with mysterious connections to their former universe in the form of Pandora. Could we see Majestic popping up in the upcoming, Pandora-centric Trinity War? Certainly he's got the power levels to hold his own against just about any member of the three Justice Leagues and could be an interesting wild card.

Majestic Comes to the New 52