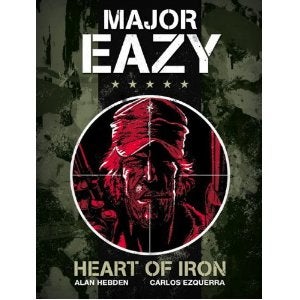 One of the biggest advantages to our current nostalgia-obsessed generation of consumers is the fascination with the niche.  Every one season television show gets its dvd release, most obscure characters have their devoted fans, and classic comics characters can see a return to the public consciousness with a collected edition.  That's currently the case for the newly released Major Eazy: Heart of Iron: Volume 1, a collected edition of comics featuring one of the UK's more unique comics characters to ever be produced.  Major Eazy is known for his adventures in World War II, and his often-napping, sometimes-shooting persona made him a cult figure to many fans.  This new collection, gathering together the first collection of cartoons featuring the man of war, was just released by Titan Books, and the book is one that fans of the series will go for.

While the volume collects the first adventures of the character, which began in the mid 1970s, and contains his entire set of adventures in Italy during the later parts of the second World War.  The black and white illustration, courtesy of Carlos Ezquerra, holds up well in the glossy pages of the volume, and fans will appreciate the inclusion of several pieces of cover art as well.  The main addition to this piece is an extensive interview with co-creator of the character Alan Hebden.  The interview shows Hebden delving into the history of the character, as well as historical research an accuracy that surrounds a character placed in the middle of World War II battle theaters.  There are also nice pieces that go into the evolution of the creative process behind the Major Eazy as well.

The book is already in stores, and those who appreciate a good war comic are encouraged to pick this one up as well, in addition to Major Eazy's fans and readers.  Keep looking for news on future volumes of the series, courtesy of Titan!