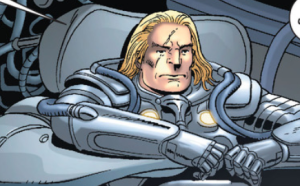 Back in January, ComicBook.com was the first to bring fans reports that Sucker Punch and Smallville star Revard Dufresne will play Dev-Em in Man of Steel this summer. The studio haven't commented, though, and IMDb has removed the entry on the Man of Steel page, leaving the character's onscreen future in question.

What ComicBook.com can confirm, though, is that the character serves as the principal antagonist to Kara Zor-El (Supergirl) in the Man of Steel prequel comic currently available to fans who pre-purchase Man of Steel early screening tickets at Wal-Mart stores.

In the comic, Dev-Em and Kara are part of a deadly physical challenge meant to weed out weaker candidates for a space exploration mission--and Dev-Em decides to get a leg up on the other candidates by killing one of the competition, who turns out to have been Kara's boyfriend/fiance. She subdues and captures him, where he's remanded to Krypton's governing council...but that's not the end of his story.

Whether he'll serve as a major player in the film adaptation remains to be seen--there's a bit of ambiguity there, certainly--but there's absolutely potential.