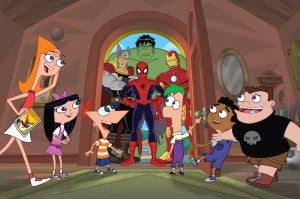 THIS is how a giant corporation capitalizes on an acquisition.  Three years after buying Marvel, Disney finally makes a BRILLIANT move.  Mixing fire with fire, they're putting the hit TV show "Phineas and Ferb" together with Marvel characters--mainly the Avengers and Spider-Man.  I don't know who is more excited--my 5 year old son or me. "Phineas and Ferb: Mission Marvel will premiere Summer 2013 on Disney Channel. Think about the potential: "The Avengers: Earth's Mightiest Heroes" and "The Superhero Squad" are kinda funny. But think about the potential of putting  P and F creators Dan Povenmire and Jeff "Swampy" Marsh in charge of the dialogue.  Kids AND parents would absolutely love the show. It's the ultimate cross-over opportunity, and I have a feeling that Disney will make it work.  If the TV show takes off, I have a feeling we'll see some bigger things in the future, including movies, video games and theme park rides. Bring it on.

Marvel and Phineas & Ferb Team Up

Girls5Eva: Peacock Exec Does Not Regret Series' Move to Netflix