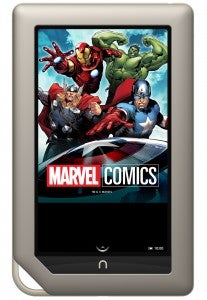 Marvel Comics issued a release this morning elaborating on Barnes & Noble's earlier announcement that their upcoming Nook Tablet would feature the largest library of Marvel titles available on any tablet. Their e-mail, sent to press around noon on Monday, said that the Nook Tablet would launch with a library of Marvel digital titles when it hits stores next week, with more to come soon.

The publisher specified that Civil War, Invincible Iron Man, Captain America, Thor by J. Michael Straczynski, Astonishing X-Men, New Avengers and Marvels would be among the first wave of releases. This marks the first time that these titles have been available digitally, including through the publisher's Comixology storefront.

Nothing was said about price point, nor whether bigger-ticket items like omnibus editions would make the jump to digital. I, for one, would love to see a digital edition of the Barnes & Noble-exclusive Ultimate Spider-Man hardcover from several years ago that collected the first 39 issues. After all, the complaints about shelf clutter aren't completely invalidated on an e-reader. The interface is sleeker and cleaner when you have your content organized like you would want it on your bookshelf.

“This is a huge opportunity for Marvel—and the entire comics medium—to reach a wider audience than ever before thanks to Barnes & Noble’s exciting new NOOK Tablet,” said Peter Phillips, Senior Vice President & General Manager, Marvel Digital Media Group. “Barnes & Noble is committed to offering customers a broad array of Marvel graphic novels, both digitally and through their massive in-store selection.”

That selection, of course, doesn't include about a hundred DC graphic novels which are no longer being stocked by Barnes & Noble stores after the publisher announced that they would be digital exclusives for Nook's competitor, the Amazon Kindle Fire. Fans and readers have already interpreted this new strategy by Barnes & Noble, which attacked DC and Amazon's move as dangerous for the publishing industry, as a rekindling (pun intended) of classic DC-versus-Marvel angling. Readers of both tablets are no doubt sorry that, as yet, neither has announced plans to make their devices compatible with the third party Comixology app which, while leaving the collected edition market as blood in the water, would equalize the presence of monthly comics across all publishers and devices.

According to Arune Singh, Director of Communication for Marvel, the Barnes & Noble deal is not an exclusive one. "[Barnes & Noble are] the first third party partner with which we’ve announced this distribution, but it doesn’t mean we don’t have plans for other or would limit ourselves in the future," Singh told ComicBook.com. "We also sell TPBs on our own Marvel App, so our graphic novels sales aren’t exclusive to one device or format."