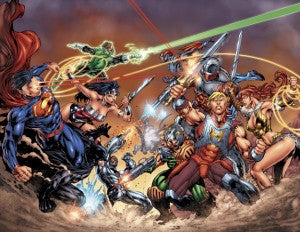 This August, He-Man and the Masters of the Universe will make their way to the DC Universe. If it's a different universe, are they still the masters of it? These are the kinds of questions that keep me up at night. Buzzfeed announced the as-yet-untitled series, which will surely be solicited on Monday so it's not as though we have long to wait. In the meantime, they spoke with Keith Giffen (who will write the series for artist Dexter Soy) about the project. Giffen, acknowledging that the trans-dimensional visitors are "just getting on everybody's nerves" in the DC Universe, said that they would nevertheless try to avoid the old staple of superhero crossovers. "That seems to be the rule for team-ups; fight, talk, team up. I'm not saying there won't be conflict between the MOTU and the DCU characters, just that we're going to try to dodge the obvious cliches," said Giffen, adding that He-Man and friends are here following Skeletor, who hopes to take over the DC Universe--but who might not be there of his own free will.