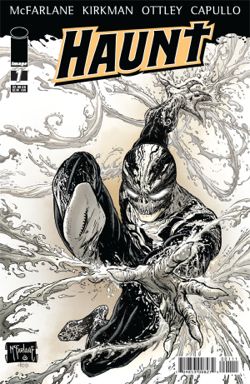 One of the most anticipated new titles from Image Comics is being released this week. Haunt is a collaboration between Image partners Robert Kirkman and Todd McFarlane. Haunt is not a mini-series, but it is an ongoing series. The creative team on the series consists of writer Robert Kirkman, layout artist Greg Capullo, penciller Ryan Ottley, inker Todd McFarlane, colorist Fco Plascencia, and letterer Richard Starkings. Haunt was formed out of a challenge to Todd McFarlane by Robert Kirkman in 2006. "One of the more satisfying parts of being an artist is giving birth to these creative children. After spending enough years raising and honing Spawn, Robert nudged me to try a hand at giving birth again. The outcome, combined with Robert's writing abilities, as well as the art skills of Ottley and Capullo, I'm extremely proud of," said Todd McFarlane. Robert Kirkman said, "McFarlane, Capullo, Ottley, Plascencia, Starkings--you couldn't find a better team of collaborators. I couldn't be prouder of this book. This is definitely a high note in my career." Haunt tells the story of a pair of brothers named Kurt and Daniel Kilgore. However, the brothers act more like adversaries than family. Kurt is a secret agent, while Daniel is best described as a less than holy priest. After Kurt's untimely death, the brothers wind up bonding in a way neither of them expects. Kurt's ghost fuses with Daniel's body to create the Haunt. Haunt #1 is a 32-page full color comic book with a total of five variant covers available. Haunt #1 is scheduled to arrive in comic book stores on Wednesday, October 7, 2009.

McFarlane And Kirkman Team Up On Haunt