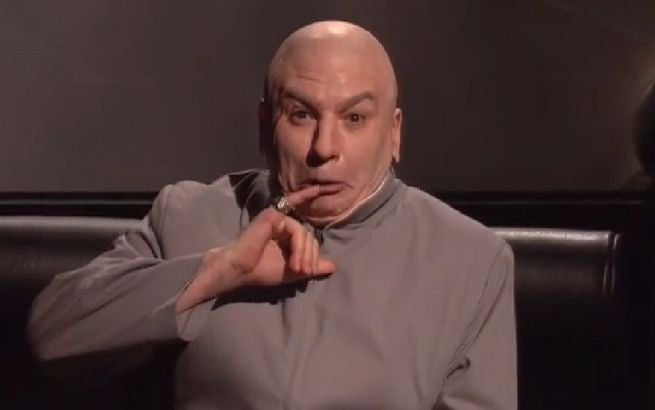 On the Amy Adams-hosted December 20 episode of Saturday Night Live, Mike Myers returned as Dr. Evil for the opening sketch. In the sketch, Dr. Evil addressed the Sony hack and Sony’s decision to not release The Interview.

“I’ve pre-empted this program because I’m furious that North Korea and Sony Pictures have both given evil organizations a bad name. I mean what the F people? It’s just so pathetic to see you two fight over a silly comedy. It’s like watching two bald men fight over a comb,” said Dr. Evil.

Dr. Evil continued, “Let’s start with you, North Korea. You’re one of the most evil countries in the world, and your act of war is to kill a movie. It’s easy to kill a movie, just move it to January.”

After relating that he and Kim Jung-Un went on a Viking River Cruise together, Dr. Evil said that Kim Jung-Un is not with it, because he still watches “laserdiscs.”

Then, Dr. Evil turned his attention to the name selected by the hackers, the Guardians of Peace or the G.O.P. Dr. Evil chided, “There’s already ready a G.O.P., and they are already an evil organization.”

After making a Dennis Rodman reference, Dr. Evil asked, “Why pick on Sony? They haven’t had a hit since the Walkman.”

Dr. Evil concluded, “I saw The Interview. It was charming. But if you really want to put a bomb in a theater, do what I did. Put in The Love Guru.”