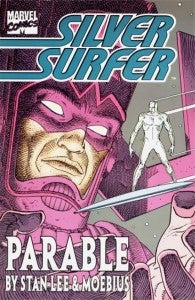 One of the true legends in the comics industry has passed away, leading to an outpouring of respect and condolences on Twitter. Jean Giraud, who was known to fans around the world as Moebius, has died at the age of 73. Giraud was a French comic artist, but his popularity and influence transcended International borders. Giraud had reportedly been battling a long illness, so his death was not completely unexpected, but hearing the news still comes as a shock to many. Jean Giraud first gained massive popularity as the co-creator and artist of the comic strip Fort Navajo in 1962. He worked with writer Jean-Michel Charlier on the comic strip, and it became a huge hit and was published uninterrupted until 1974. Fort Navajo even inspired a spin-off western serial called Blueberry.   In 1963, Giraud started using the name Moebius for his science fiction and fantasy work. However, the name really didn't take off until Giraud co-founded Metal Hurlant magazine, which serialized some of his work. In 1988, Moebius collaborated with Stan Lee on a two part Silver Surfer limited series. In addition to his comics work, Giraud is perhaps best known among the American public for his film work as a storyboard artist and concept designer. Some of the films he worked on included Alien, Tron, The Fifth Element and The Abyss. As has now become customary when a legend passes, comic book creators and fans have turned to Twitter to express their sadness. Comicbook.com has collected some of the most memorable tweets about Moebius from writers, artists, and those in the comics industry and listed them below. Author Neil Gaiman tweeted, "RIP Jean Giraud who wrote and drew as Moebius. His art inspired me when I was 14, & his stories did too, because I didn't understand them." Beanworld creator Larry Marder tweeted, "RIP. He died during the solar storms so it's as if even the universe wept." Marvel Chief Creative Officer Joe Quesada tweeted, "R.I.P Moebius, perhaps one of the greatest artist to ever walk this earth." Writer Paul Coelho tweeted, "I bow in reverence for you, Moebius. Your body died today, your work is more alive than ever. Will remember forever your house, your smile."