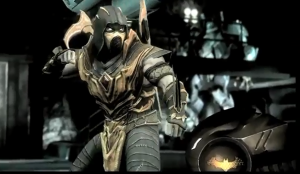 Warner Bros. Interactive Entertainment today released a video officially confirming that Mortal Kombat character Scorpion as the next DLC character that will be available for the DC Comics fighting game Injustice: Gods Among Us. Scorpion will be available on Xbox LIVE Marketplace for 400 Microsoft Points and PlayStation Network at a price of $4.99. You can check out a new trailer which includes interviews with DC Entertainment co-publisher Jim Lee and Ed Boon, Creative Director at NetherRealm Studios, below. Lee redesigned the look of the character for the game in the hopes of giving the video gaming staple a more DC Universe-friendly appearance. Scorpion has already faced off against members of the DC Universe in a previous video game, Mortal Kombat Vs. DC Universe.

Mortal Kombat's Scorpion Confirmed for Injustice: Gods Among Us

Lord of the Rings: What Are the Rings of Power?