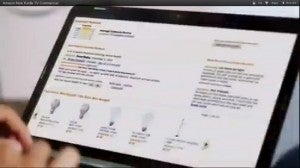 A new Kindle tablet is apparently coming from Amazon, just about a year after the announcement of the popular Kindle Fire.

How do we know? Well, Amazon has an announcement planned for later today, but they already included shots of the device in a television ad last night. Around halfway through a one-minute ad that aired during last night's Cowboys-Giants NFL game, sharp-eyed viewers noticed that the tablet being held by one of the users appears to be noticeably larger than the ones currently available from Amazon.

Given the recent streaming deal announced with EPIX, which brings a lot of new content to their free, streaming Amazon Prime service, it seems likely Amazon is looking to release a more media-friendly tablet, more in line with Apple's iPad than Barnes & Noble's Nook, which has been Amazon's prime competitor up to now in the e-reader market. Around the time Amazon announced their Kindle Fire, Barnes & Noble released Nook Tablet, which was faster and more media-friendly than the Fire but also features a more restrictive app market.

Given the fact that Barnes & Noble was taking a play out of Apple's playbook there, it will be interesting to see whether any new Kindle devices will feature the same kind of broad app support that the Fire boasts. It would be a shame to gain functionality for the mainstream but to lose ComiXology, something that's been key to the device's appeal to comic book fans. Still, with both Marvel and DC now having collected editions widely available in graphic novel form from Amazon and Barnes & Noble, it wouldn't be entirely surprising to see Amazon make that move.

New Kindle Tablet Appears in Amazon Ad Before It's Announced