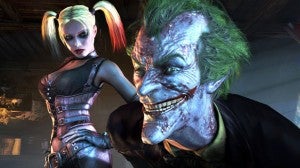 At the Electronic Entertainment Expo this week in Los Angeles, Nintendo announced that they will release a special edition of Batman: Arkham City. Titled the "Armoured Edition," the game will be modified to offer more options to control movements using the Nintendo GamePad and the Wii U tablet. This in addition to announcements this week at E3 that Nintendo would be releasing new or upgraded versions of a number of their controllers in the near future. FearNet also reports that the game will include unique features like using the controller's gyroscopic function to use a batarang, calling the functions a hand-held utility belt. Check out the trailer below.