This afternoon, The Avengers director Joss Whedon, as well as stars Samuel L. Jackson, Clark Gregg and Tom Hiddleston held a "Global Twitter chat" with fans that brought the convention panel experience to computers around the world, complete with the opportunity for fans to ask questions, win prizes and see an exclusive clip from a new trailer for The Avengers which will debut during Sunday's Super Bowl XLVI. Below is a transcript of the questions asked of (and answered by) the actors and director, organized on a timeline and then scrambled a bit to put similar topics together. Among the topics discussed--Joss Whedon nixed rumors of a Spider-Man cameo in The Avengers; Clark Gregg lamented the lack of an Agent Coulson action figure; and apparently there's a mano a mano between The Hulk and Loki in the film that caused some on-set scrambling. Oh, and apparently Clark Gregg speaks Spanish. Or has access to Google Translate. We'll begin with Clark Gregg, whose first answer was to a question that seems to have vanished from Twitter--but was intriguing nonetheless. Clark Gregg: Very different dynamic in Iron Man, Thor and The Avengers, different heroes, more layers to Coulson's world/powers revealed. Jeff Rothan: To Mr. Whedon, how many Avengers comics did you read as reference for this movie? Joss Whedon: I had already read them all. 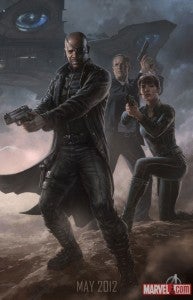 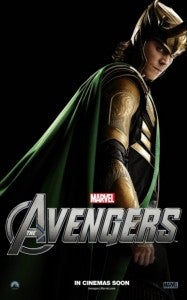 Natasha Arsenault: In Thor, you had lots of emotions. In The Avengers, was there a day where you were devastated emotionally after "cut" Tom Hiddleston: You have to reach deeper. And stay aware of the fact that the emotions are true, but they're not mine. Dr. Thiago Sequiera: In the end of Thor, we see that Thor still loves his brother and misses him a lot. Does Loki feels the same? Tom Hiddleston: The opposite of love is not hate but indifference. And Loki hates his brother. Rebecca McKinnon: In Thor, Loki was looking for Odin's attention and approval, now is he looking for revenge? Tom Hiddleston: He doesn't want revenge so much as identity. Belonging. Purpose. Self-esteem. Through delusional dreams. David Aaron Reeves: Tom Hiddleston, Shakespeare quote to describe Loki? Tom Hiddleston: "O beware my lord of jealousy, it is the green eyed monster that doth mock the meat it feeds on" (Othello)... ...Or "Stand up for bastards!" (King Lear) Nate Barchett: Five years ago, would you have believed that you would play the most badass villain in superhero movie history? Tom Hiddleston: Bless you. And no! Denise Morse: Can you enjoy The Avengers without seeing all the other films? Joss Whedon: You don't need to see any Marvel movies to enjoy The Avengers! But you need to see Steel Magnolias, like, six times. Ponzi Brandao: Can we expect some bromance between Captain America and Iron Man? Joss Whedon: Not as long as there's two of them and only one bagel. Heroes need carbs. Matt Metherell: Feels like every question has already been asked...so how was catering on set? Joss Whedon: I stayed away from catering. But it smelled good from far away. Leslie Pleasants: How long did it take to shoot the movie? Joss Whedon: I started when I was 12 and should be done by May 3rd at 11:59 pm. Claire D: What do you consider your character's theme song for The Avengers? Samuel L. Jackson: "Born Free"/Hendrix josuegoth: Clark Gregg, what can we expect after the credits? Clark Gregg: I don't know, man! Enrique: Samuel L. Jackson--Nick Fury or Mace Windu? Samuel L. Jackson: Jedi or mortal? You be the judge! stellaviola: Tom Hiddleston, will we see you pole dancing again in The Avengers, just like we did in Thor? Tom Hiddleston: Ahem... (clears throat)... er... well... I don't think so. Joss? auntiesunshine: Clark Gregg/Joss Whedon TV series? Please? Clark Gregg: Great idea. Asking him now. Joss???? Victor Aragon: Who was the jokester on the set? There is always one on every movie shoot. Joss Whedon: I had the jokester put down on day 3. Tom Hiddleston: By the way... IN THE END, IT WILL BE EVERY MAN FOR HIMSELF. Clark Gregg: Meeting some Skrull friends for lunch. Thanks for the all the support! Coulson out!