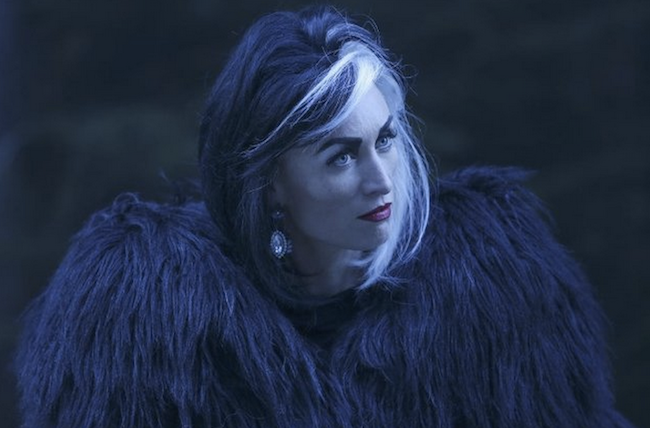 After a lengthy hiatus, Once Upon a Time returns with the twelfth episode of season 4, "Darkness on the Edge of Town." The episode opens "many years ago" where Rumplestiltskin (Robert Carlyle) has invited Ursula (Merrin Dungey) and Cruella De Vil (Victoria Smurfit) to Maleficient's (Kristin Bauer van Straten) Forbidden Fortress, where the three begin to fight on arrival. Rumple steps in to inform them of his intention: their happy endings.

Meanwhile in modern-day Storybrooke, everyone is happily, peacefully living their lives, without Rumple in town. That is, mostly happy, as Hook (Colin O'Donogue) is still frustratingly trying to free the fairies from the Sorcerer's Hat, with the help of Belle (Emilie de Ravin). The two discuss love, reminiscing about Rumple, who – either figuratively or literally – had their hearts.

Rumple is crashing at Ursula's house in the modern world, where he's eating with Ramen noodles and generally mooching, as she grows resentful. Luckily, Rumple receives an email just when their roommate tension is at its highest, leading them to Cruella's home in Long Island, where police have stepped in to take away her luxurious possessions.

Next, Rumple asks Cruella if she's tired of having everything taken from her, slowly persuading her to trust him. She eventually agrees to take his advice, giving both him and Ursula a ride to a little town where he promises magic still exists: Storybrooke. On the way, he tells them about "the Author," who he blames for all of their troubles.

Back in to the Forbidden Fortress flashback – the villainous ladies don't believe Rumple's claims. He tells them that all they need is to find the perfect curse: one that will bring happy endings to all three of them, though the trio remains skeptical.

Then, Emma (Jennifer Morrison) visits Regina (Lana Parrilla) in Storybrooke, when Emma accidentally finds the image of that Robin mysteriously found in the library, the one that depicts Robin and Regina kissing in a seemingly happy ending. Belle and Hook bust in before they can talk about it, telling them they got a professor to translate an obscure spell to release the fairies. Regina simply has to enact it.

The group heads to the woods, where Regina performs the necessary ritual to free the fairies from the hat box, according to the mysterious professor. The fairies are freed, and while hugs are shared, a thick, black smoke begins to ooze out, floating into the sky and forming the shape of a winged demon and flying away.

Back to the flashback, where Rumple has led Cruella, Maleficent, and Ursula to a mountain, that contains the curse deep within behind a series of tasks that seem perfectly suited to the three powerful women. Cruella persuades a wall of bugs to disassemble, Maleficent channels away some dragon fire, and Ursula uses a tentacle to swipe an orb holding the curse. But once they give Rumple the orb – he simply leaves, abandoning them with a final task.

They are left to battle the true guard of the curse, Chernabog, a demon-like figure most-known from the "Night on Bald Mountain" sequence from Disney's Fantasia. The three initially hide, but Maleficent reasons that one of them will have to act as bait, trusting the other two to save her after they are able to escape. 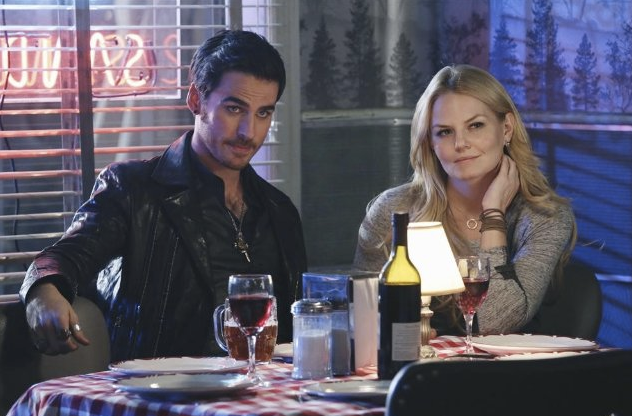 On the outskirts of Storybooke, Rumple finds a tie that he specifically placed on a tree near the town's entrance, explaining its existence to Cruella and company. They struggle to believe him, before he explains that the plan is for them to enter, since he's been banished, to let him in afterwards. Point being, it's him that has to trust them, and not the other way around.

Hook continues to brood about the fairies, even though they've been freed, since he blames himself for their initial imprisonment. The rest of the town is celebrating nearby, where Regina approaches one of the fairies to ask about the Author. She explains that he sometimes left clues about his whereabouts in his works. Before long, there's an earthquake-like shake; the smoky figure that emerged from the hat was Chernabog.

Everyone in the town is running in panic as Chernabog flies around. Belle explains that they won't be able to banish him back to the hat, because once something is freed it cannot be made to be held in the hat once again. Emma and Regina combine their very best magic, but it merely stuns the creature.

On the border, Ursula uses Rumple's phone to call Regina, who puts Ursula and Cruella on speakerphone so that Emma can hear. The villains claim that they've changed, and ask for permission to enter the town. Regina doesn't want to let them in, until Ursula claims that she can stop Chernabog.

Back to the villainesses' flashback again, where Chernabog has gone after Maleficent. It doesn't seem like the other two are coming to save her after they've escaped at first, but then, a tentacle dips down to pull Maleficent to safety at precisely the last possible moment.

Regina is convinced that Chernabog is after her personally, since he seeks to "devour the heart with the darkest potential," and afterall, there's no dwarf in town called "Evily." Without Rumple, the heart in question clearly belongs to her. Emma reasons that if they coax Chernabog over the town's border, its magic will be thwarted.

Emma and Regina drive towards the border, with Chernabog in tow. Regina poofs herself right to the edge when they get to the edge of Storybrooke, and Chernabog tumbles over her, seeming to dissolve, exactly as they planned. Cruella and Ursula can be seen on the other side of the border, and after some reasoning, they are invited into the town with a magic scroll.

When night falls, Rumple is about to give up waiting for Cruella and Ursula, when suddenly he is offered the magic scroll as well. The ladies welcome him back, and he explains that for the next part of his plan, they simply have to blend and make friends. He also tells them that it was him who "translated" the spell for Belle to release the fairies – also releasing Chernabog.

Cruella and Ursula are worried that their biggest challenge in Storybrooke is Regina, but Rumple thinks otherwise. He says that the heart with "the darkest potential," the one that Chernabog was after – belongs to Emma.

Lastly, Snow (Ginnifer Goodwin) and Prince Charming (Josh Dallas) meet with Ursula and Cruella, whom they are extremely reluctant to let into the town. Snow says that they'll allow them on one condition: They must never speak to anyone about what happened between them in the Enchanted Forest, especially Emma. If they do, Snow threatens to rip out their hearts.

Once Upon A Time Season 4 Episode 12 Recap With Spoilers: Darkness on the Edge of Town