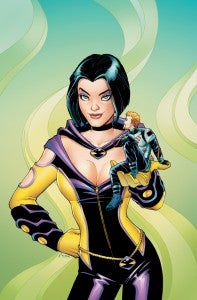 DC Comics has announced a Phantom Lady miniseries by writers Jimmy Palmiotti and Justin Gray with artists Cat Staggs and Rich Perotta to be released beginning in August. The star writing team, who have a history with Phantom Lady's old team the Freedom Fighters, are currently working on The Ray with Jamal Igle, another character who used to populate the DC Multiverse's Earth X and be a member of the Freedom Fighters. The series will reportedly revolve around not only Phantom Lady, whose pre-New 52 DC Universe iteration had aged somewhat and was best known as an ancestor to Jack (Starman) Knight and Kate (Manhunter) Spencer--but her literal boytoy as well, a reworking of shrinking superhero Doll Man. "Phantom Lady and Doll Man is an exciting return to the roots of the characters as pulpy, street level crime fighters with a few new twists and some heavy sci-fi overtones," Justin Gray told DC's blog. "We took the best of their original core concepts and updated them with no relation to our previous work on Phantom Lady and Doll Man in the Freedom Fighters. You're getting in on the ground floor of the origin story of two people whose lives intersect and a common threat that transforms them into pretty amazing and engaging superheroes." In spite of a brightly-colored, spandex-clad look, that "gritty noir" thing keeps popping up again and again in DC's blog post regarding the release.  "It is a wonderful take on a classic character," said artist Cat Staggs. "The story itself leans towards a gritty crime noir, which is something I am a huge fan of. Getting to draw this on a daily basis is a dream! I can't wait for fans to see it!" As with The Ray and so many other DC series these days, the focus of the story will apparently be on redefining not only the character, but their role in the rejuvenated DC Universe. The first issue, with a cover by Amanda Conner, will be available on August 29. What connection, if any, her story will have to the reported zero issues coming in September, or the annuals being released for Superman, Detective Comics, The Flash and Green Lantern on that same day, remains to be seen.