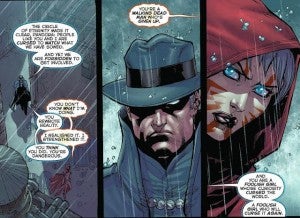 When Justice League International was canceled recently, it surprised a lot of people. There are, of course, a number of DC books that are selling far worse than Jurgens' and Lopresti's take on the Giffen-DeMatteis League, and DC had hinted that rolling new "waves" of titles in and out would be a better way to generate interest and coverage than just killing a book here or there.

While the story of that book is yet to fully take shape, Bleeding Cool has rumors that both The Phantom Stranger (last seen in DC's Free Comic Book Day special) and Katana (a fixture in Birds of Prey) will get new monthly series when the next wave hits. While the rumors on Katana are somewhat hazy--they say that David Finch, who seems to be drawing about 1/4 of the covers in the DC Universe, will be drawing covers for a book featuring the character--the creative team for the rumored Phantom Stranger book is totally intact, with Bleeding Cool saying that DC Co-Publisher Dan DiDio will write the book for artists Brent Anderson and Scott Hanna.

The news & gossip site argues that it would make sense for these books to begin in September, with the rumored "zero issues" that will provide pertinent background information on DC's characters prior to last September's 52 #1 issues, although how that would be managed with only the one book solicited as a "final issue" and DC maintaining that they want to have 52 ongoing superhero titles in print at any given time is anybody's guess.

With books like Mister Terrific and Static Shock failing, it will be interesting (assuming this is true) to see whether The Phantom Stranger is billed as a nonwhite character. In the Free Comic Book Day issue, we saw something of his origin and it seemed clear that he is being depicted as Judas Iscariot, someone who of course would come from the Middle East.

His complexion is still just as pale as it was before Flashpoint, though, and that seems oddly like a missed opportunity. Especially since the traditionalists who are complaining about Green Lantern's sexuality retcon may give DC a pass on that particular issue--the Judas angle is something fans have speculated about for years with that particular character, whose pre-New 52 past was always shrouded in mystery.

Geoff Johns, who wrote the Free Comic Book Day special and seems to have spoiled the mystery, has a way of doing such things. Besides the identity of Rip Hunter (he's Booster Gold's son!), a mystery he himself initiated in JSA, Johns has been known to pick up on long-dormant plot threads and mysteries in books like Green Lantern and Hawkman and put his stamp on those old stories by giving them a definitive answer.

All of that said, a Phantom Stranger series seems less like something we're likely to see with September's #0 issues and more like something that would spin out of Trinity War, DC's upcoming, Pandora-centric event in which he seems poised to play a major role.

And hey! Whatever happened to Anderson's Astro City, which was supposed to come to DC Comics? It was announced right around the time of the relaunch and there's been no substantial movement on it since. It almost seems as though that particular announcement was put into place just to give DC a token "arty, creator-owned book" to hang their hat on while being accused of crass commercialism in the form of the relaunch.

WrestleMania 37: Backstage Report on How WWE Handled the Rain Delay

Pixar's CGI Has Come a Long Way Since Toy Story

Fear the Walking Dead Season Preview: The End Is the Beginning For Morgan Jones and Friends