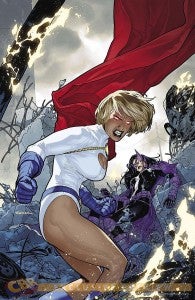 Given the apparent connections to the DC Multiverse in Worlds' Finest #19 and Supergirl #20, let's not assume just yet that this is the same character necessarily.

Still, in a newly-released preview, DC Comics has revealed via CBR that Power Girl's comically impractical and fan-favorite costume will return in May's Worlds' Finest #20.

When Worlds' Finest launched last year, fans were dismayed by the new costume, generating some of the most heated comments in ComicBook.com's history and forcing DC to revise it prior to publication. Those changes did little to stop the controversy.

In fact, along with Superman's "no-trunks" look from the New 52, Power Girl's Worlds' Finest costume made our list of the five most controversial costume changes in recent memory.

It's interesting to note that Power Girl will join Apollo and Midnighter, at least, who are returning to their pre-Flashpoint costume designs over the next three or four months. Whether this marks a return of the pre-Flashpoint versions of the characters, an entirely new batch of characters, or just a coincidence is unclear at this point but is certainly worth keeping your eyes on.

You can check out the solicitation, which seemingly confirms this is the same Power Girl, below.

WORLDS' FINEST #12 Written by PAUL LEVITZ Art by KEVIN MAGUIRE and GERALDO BORGES Cover by RYAN SOOK On sale MAY 1 • 32 pg, FC, $2.99 US • RATED T As Power Girl returns to her classic look, DeSaad wreaks havoc on her tech empire—and PG and Huntress find themselves hunted by the talented torturer from Apokolips.