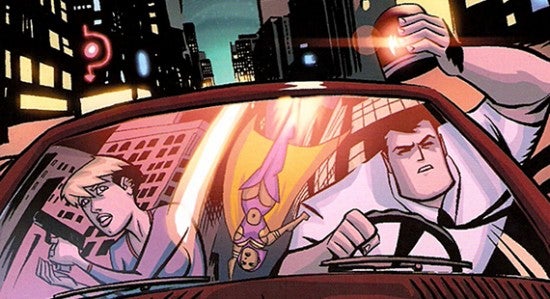 Sony Pictures Television, who have been developing Brian Michael Bendis and Michael Avon Oeming's Powers for years in a few different forms, have inked a deal to send it straight to series as an original program for their own PlayStation video game console, according to The Hollywood Reporter. The series revolves around a pair of police officers who work for a special division handling metahuman crime. It was an immediate success when it first launched in 2000 and has continued to sell well whenever Bendis and Oeming can pull away from their lucrative work-for-hire projects long enough to produce new issues. Sony will reportedly recast the entire project with writer Charlie Huston stepping in to draw up a new draft of the pilot. Circle of Confusion will return to executive produce alongside co-creators Bendis and Oeming. Michael Dinner will remain on board as an EP and director. Huston and Falling Skies'  Remi Aubuchon will exec produce, with Bendis and Huston set as showrunners. David Engel, David Alpert and Lawrence Mattis, who also work with AMC on The Walking Dead, will oversee the project for Circle of Confusion. This will be PlayStation's first original series. Netflix, Hulu and Amazon all producing multiple original series that are accessible only to those who subscribe to their services; PlayStation's closest competitor, Microsoft's Xbox console, is developing their own in-house series in the form of Halo, although they haven't yet formally ordered it. Powers was first developed as a pilot at FX in 2011. Fans who saw it were excited, but apparently the uninitiated were not, as either test audiences or the network didn't connect with the work and it was sent back to be completely reworked in 2012. Since then, there have been conflicting reports as to just how seriously FX was taking it or how far along they were on the reworked pilot.

Powers Headed to PlayStation as Original Streaming Series By Sony